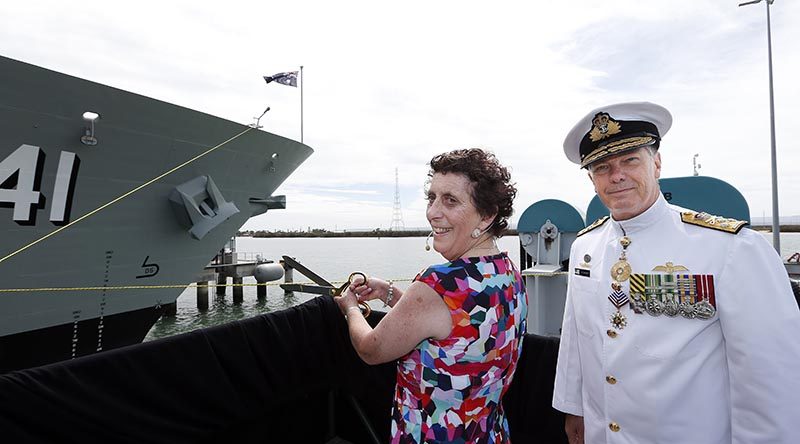 The Air Warfare Destroyer (AWD) program reached a significant milestone in Adelaide today as the second of three destroyers was formally named and launched.

CAPTION: Mrs Robyn Shackleton, wife of former Chief of Navy and Commanding Officer of HMAS Brisbane II, Vice Admiral David Shackleton (retired)(right), was guest of honour and launching lady, sending the destroyer on her way with the traditional toast and smash of a bottle. Photographer unknown, via Navy Daily.

“I have been on-board the first destroyer, Hobart, and it is quite apparent these completed ships will become a valuable asset to the Royal Australian Navy,” Minister Tehan said.

“Australia is undertaking an unprecedented upgrade of its naval capabilities, and the addition of the Brisbane to our fleet will help ensure our ongoing national security.”

Minister for Defence Materiel Christopher Pyne [who wasn’t at the launch] said many companies came together to get the second AWD in the water.

“I would like to take this opportunity to congratulate the shipbuilder ASC, mission systems integrator Raytheon Australia, ship build manager Navantia and the Government’s representative, Defence, on this momentous occasion.

“The construction and integration work occurring here in Adelaide on the AWD program is a vital part of South Australia’s shipbuilding industry.”

Minister for Defence Marise Payne [who was also not at the launch] said Brisbane’s launch was a significant step towards the delivery of three world-leading warships to the Royal Australian Navy.

“The Air Warfare Destroyers will be one of the world’s most capable multi-purpose warships that will provide the Royal Australian Navy with air defence for accompanying ships, land forces and infrastructure in coastal areas,” Minister Payne said.

“The Brisbane will have cutting edge layered defensive and offensive resources capable of operating across [a range] of maritime operations, from providing entire task groups with air defence and escort duties, right through to law enforcement and rescue operations.”

Over the coming months, outfitting of Brisbane will continue, as will the loading of combat system equipment.

Ship 01, Hobart, will conduct sea trials  off the coast of South Australia early next year, to test combat and communications and other systems.

The third destroyer will now be moved forward into its final-construction position in the shipyard where final consolidation will take place..