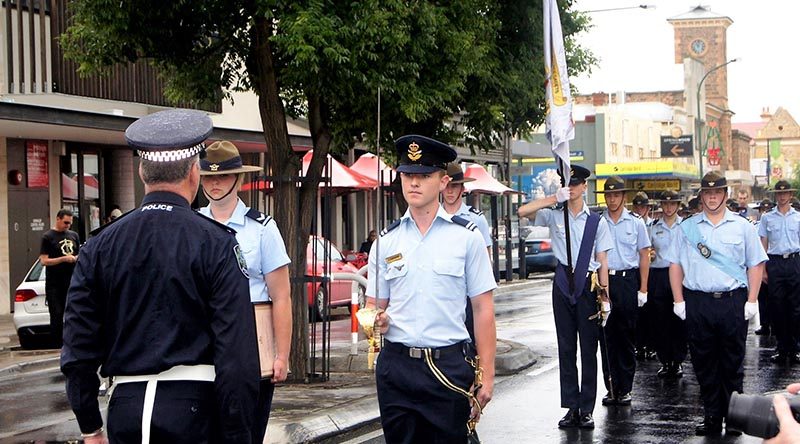 On Sunday 4 December, No 608 Squadron AAFC entered the Town of Gawler in South Australia – exercising its Right of Entry to mark the 75th Anniversary of the Australian Air Force Cadets.

The Squadron conducted a ceremonial parade in the main street of Gawler “with swords drawn, drums beating, bands playing and banners flying”, and with a South Australian Police escort.

No 608 Squadron, Australian Air Force Cadets – known as the ‘Town of Gawler’ Squadron – primarily draws its cadets from the Willaston-Gawler region north of Adelaide, although some come from a bit further afield.

Flight Lieutenant (AAFC) Murphy said the squadron had a proud heritage, with origins in No. 86 Squadron RAAF, a fighter squadron that was formed at Gawler on 4 March 1943 for war service.

“After World War 2, its heritage was taken up by ‘Number 8 Flight’ of the South Australian Squadron of the Air Training Corps for 50 years from 1951 to 2001”, he said.

“A large number ‘8’ formed by floor tiles can still be seen today in the entrance foyer to the Squadron’s headquarters.

The Squadron has been known as No 608 (Town of Gawler) Squadron since 2011 when it was granted Freedom of Entry to the City of Gawler – exactly five years ago on 4 December 2011.

Flight Lieutenant (AAFC) Murphy said the awarding of the Right to the Freedom of Entry to the town and its accompanying scroll ranked as the highest public honour that can be bestowed upon a unit.

“As such, the document and the rights attached to the process are highly cherished and protected”, Flight Lieutenant Murphy said.

The significance of this honour can be seen in the fact that only three AAFC squadrons in South Australia have been granted a Freedom of Entry, plus No 6 Wing itself (granted the Freedom of Entry to the City of Adelaide in 2003).

Pilot Officer (AAFC) Paul Rosenzweig, 6 Wing Public Affairs Officer, said the opportunity to exercise this right of entry in the AAFC’s 75th anniversary year was a very proud moment in the life of 608 Squadron.

This event also marked the 65th anniversary of the original creation of ‘No 8 Flight’ of the Air Training Corps in 1951. 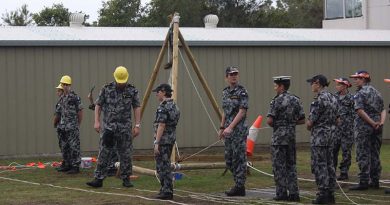 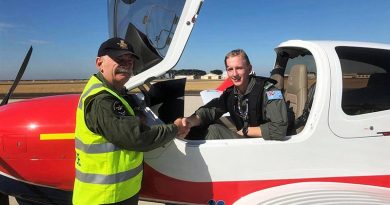