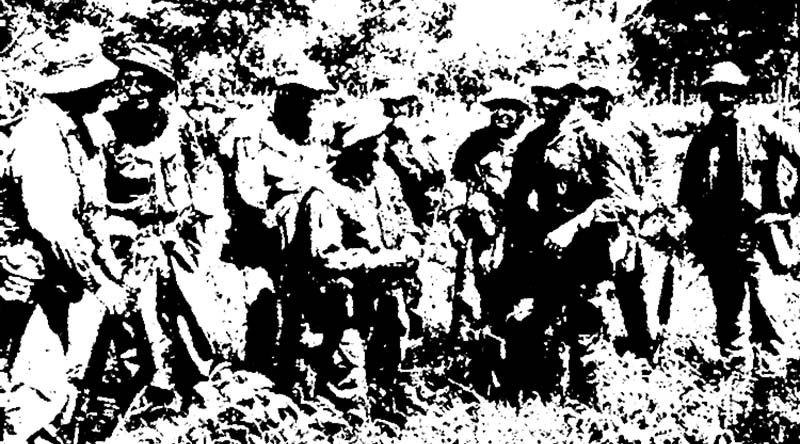 Someone said that soldiers expend more ammunition in training than they do in actual combat with the enemy.

Someone said that if you take the rounds expended during the Vietnam War and compare it to the number of enemy killed, it takes on average 80,000 rounds to kill one Viet Cong.

I bet you never knew that.

There is one person responsible for snippets of information like this, his name is Sum Wun.

We are entering the tactical phase of our Infantry Corps training next week and Sum Wun says we are going to have our rings hanging out (this means it will be tough).

Tough?  That’s us.  We regularly hit the confidence course, jog over to the rifle range and scare the bejesus out of the targets, jog back to our lines, have a shower and complete a day’s work of lectures and other stuff.  We are supermen, the tactical phase will not be a problem.

Do you think we are a tad overconfident here?

Anyway we have the weekend off so we had better make the most of it.

In a rush of blood I befriended a guy from Canberra. His name was O’Connor and he had his car with him in Townsville.  It was a Renault station wagon thingy with a 1600cc motor. The seats were nice and comfy. I was really impressed by this car but I didn’t tell him that.

I’m a Ford guy.  I don’t think I told him about my old Ford Zephyr ute which I gave to my brother prior to my coming to Townsville.

We met a couple of chicks the previous weekend and we had a date with them this weekend.

OK, so O’Conner charmed this sheila and I was the friend that hooks up with her friend.  Still she seemed nice.  She was of slight build with long wavy dark hair.  She was about my age and she talked a lot.  O’Conner’s girl was blond with big tits.  I forget their names.

We pulled up at the dark haired girl’s place.  I strode up to the front porch very confident with a skip in my step, just like you see in the movies.  I rang the doorbell and after a minute or so a woman opened the door part of the way.  She stood so that half her body was still behind the door.   She told me that her daughter was not feeling well and that she wouldn’t be able to go out with me tonight.

I dunno what happened after that, I think O’Conner dropped me off at Louth’s Hotel where most of the other blokes were; and I probably told them I got a root.  It wasn’t a bad pub, Louth’s.  It was quite modern and it was located in the main street of Townville.  They had a downstairs bar where they played music.  It was called Louth’s Downstairs Lounge and they had a dress code to keep the riff raff out.  You couldn’t get in without a tie but you could hire one for $1.

We went to some pubs in town and we avoided others.  The reason we avoided them is because some Army units treated them as their own and it was quite easy to get into a punch up; you know what Army boys are like.  Just ask Jungles.  He had a punch up with some Artillery boys and he managed to mangle a few faces before his own succumbed to a bit of punishment.  His left eye was quite swollen for a couple of days.

As luck would have it, this occurred when the Army introduced those new fangled ID cards.  They were small plastic cards and they included a colour ID photo.  Jungles’ ID card featured him wearing a black and swollen left eye.  Seems fitting really, Jungles’ nickname I mean.

We ate a lot at the Hong Kong Chinese Restaurant. It was licenced so you could get a beer with your meal.  The girls wore a long golden top that was close fitting, with black pants underneath, but I’m sure we ate there because they served good food.

Burke, from Adelaide, always had the same meal.  He was well looked after.  The beer waitress would drop off a VB stubby as he was in the process of sitting at the table.  A minute later his meal, sweet and sour braised king prawns with fried rice, was placed on the table in front of him together with a bottle of soy sauce.  How’s that for service?

Monday was looming and I wasn’t worried, I was ready for whatever Audey and the ginger headed moartar man had in store for us.  At least our new boots were broken in.  We were issued those new beaut GP boots, the kind that lace up your leg a bit.  They also had a metal plate under the sole as protection against punji stakes or really big bindies.  To break the boots in you fill them with water to get the leather nice and wet and then wear them around until they are dry.  The boots then fit your foot like a glove so to speak.  Rick from somewhere in NSW broke in his boots this way one weekend.  A bloody RP (Regimental Police) spotted him wearing GPs with civies around the barracks and tried to have him charged. The crime? Mixing civilian and Army dress.  It must have been a slow day for the RP.  Rick had moved around NSW a lot because his old man was a senior copper.

It’s Monday and we are go.  We have the latest gear, I’ve already mentioned the boots, but I didn’t tell you about our packs.  They were WWII Pattern 38 packs.  If you dunno what they are then think of an olive coloured canvas bag with a flap on the top and two canvas straps with metal ends that fit through a metal catch to tie it down and stop it from exploding its contents all over the forest floor.  It has two fatter straps that go over your shoulders.  It was big enough to hold about two reams of paper.  In it we carried enough stuff to survive on for a week and in the process loose about a stone in weight.

The ration packs we were issued were cannibalized and most of the stuff was thrown out.  We carried ‘jack rations’ – usually a jar a vegemite to put on the dog biscuits, and a couple of packets of Maggi soup satchels.

We also managed to squeeze in a spare uniform and a spare pair of socks.  There was no need to put in a spare pair of jocks as we didn’t wear any.  I also stowed some shaving gear somewhere, I could usually clear the bum fluff away with just the razor and no foam or water.  A toothbrush and toothpaste rounded me out.

In our webbing, made of the same canvas material that was a bastard when they got wet and started to dry out, we carried all the fighting gear, you know, ammo and stuff as well as water in canteen bottles.  Water was at a premium so we had to adhere to water discipline, in effect we were nearly dying of thirst in the bush. That’s what Army training is all about – how to cheat death.

The convoy set off with us guys jammed in the back like sardines.  I love those rides in the back of Army trucks.  They tie the flaps down to keep the dust out and to keep the cigarette smoke in.  To get to Army training areas they follow winding roads at breakneck speed.  After a couple of hours the truck stops and the flaps open.

I am covered in dust, I reek of cigarette smoke, I feel nauseous from the ride of death, I have no idea where we are or what time it is or what’s happening except we have to get off the fucking truck.

Do they think we like being on these monsters?  Ginger mortar man is in his element.  Looking refreshed after his ride in the front of the truck where he was able to snooze in a dust and smoke free zone, he starts cranking up the volume, “Why are you cunts standing around like stale bottles of piss?  One grenade and you are all finished, fan out and get down on ya guts!  You, dickhead.  Is that a rifle you are holding?  Get a hold of it man and take up a firing position!”

I should have chundered on him then and there. That’d shut him up.

I now have a throbbing headache to add to my list of ailments.  I wonder what my face looks like?  It’s probably really really pale, except no one can tell because of all the cam cream on my face.

We all dive on the ground. No sooner had we done that when Audey calls out for our platoon to come to him.  Hang on a minute, are we tactical now or not?  We get back up, grunting under the load of our gear that shifts everytime we get up or down.  “Hurry up, hurry up.  Geez you blokes had better get a sense of urgency about yourselves we have a lot of work to do.”  We gather round the platoon commander but we keep our distance because of the grenade throwing bad guys, we stay spread out, some of us go to ground again.  “Fuck me youse blokes are idiots, get up and get over here, NOW, for fuck sake!”

We are 5 minutes in to a 5 day tactical exercise and all I want to do is shoot the platoon commander and the platoon sergeant. 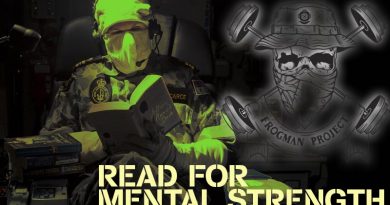 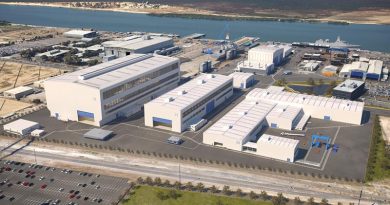 When minister thinks she done good on radio

3 thoughts on “Chapter 16: Nearing the sharp end of corps training”