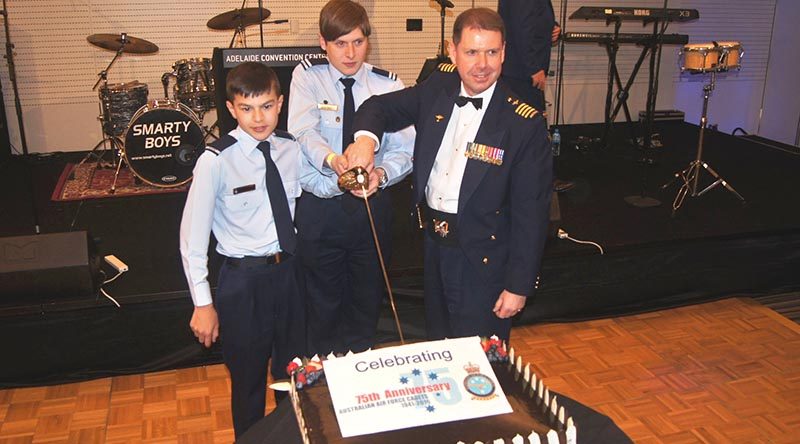 To top off this year’s 75th Anniversary celebrations of the Australian Air Force Cadets (1941-2016), cadets and staff of Number 6 Wing recently gathered for an Anniversary Ball at the prestigious Adelaide Convention Centre.

CAPTION: Group Captain Richard Trotman-Dickenson, with the most junior cadet and most senior cadet in uniform Cadet Adomas Neocleous and Cadet Under Officer Lachlan Renfrey, both from 619 (‘City of Onkaparinga’) Squadron at Seaford, cut the anniversary cake.

Number 6 Wing acknowledged the Gold sponsor of the event, Saab Australia, represented by Dennis Medlow and his daughter Katherine.

The Australian Army Band–Adelaide played background music during the early part of the evening, and guests then danced the night away with the Smarty Boys.

“We are all here because in some way we share a commitment to youth development,” Pilot Officer (AAFC) Rosenzweig said as he welcomed the guests.

“As officers and instructors and senior cadets, we see young people develop and mature, and that is our greatest reward.

“But, a commitment to youth development isn’t just about quoting the principles which make up the AAFC Youth Development Philosophy.

“It’s about making repeated incremental contributions which collectively help to shape the development of a young adult.

“Contributions which help them develop those age-old attributes of ‘success’ such as self-discipline, ability to participate in a team, and time management – benefits that we use throughout our lives.

“We are rightly proud that many cadets have gone on to forge successful careers in the Australian Defence Force and civilian industries.

“Sometimes the effects of our contributions won’t be seen for many years – when you meet a former cadet who has since become a helicopter pilot, or become a retrieval medic in the RAAF.

“A tank driver in the 1st Armoured Regiment.

“Or indeed, an Air Vice Marshal.

“As you leave here tonight I ask you to ponder – what have you done in this last week that has contributed in some way to the development of a young Australian?.”

Nonagenarian John Stanley, a former ATC member who joined up on the first night in 1941, currently living in Port Lincoln, made a virtual appearance to deliver a message of greeting to current and former cadets and staff.

Among the guests were many former cadets, including two Air Vice Marshals and the current Chief Commissioner and CEO of the Australian Transport Safety Bureau.

Former cadets also included Bob Foreman (joined in 1956), Graham Evans (1957) and Rob Moore (1957) who were the most senior ex-cadets present at the Ball.

A special tribute was also paid to Warrant Officer (AAFC) Steve Hamer who joined the ATC as a cadet in 1962, and has served as a staff member since 1965 – he holds the Australian Cadet Forces Service Medal with 7 clasps representing over 50 years’ service as an adult staff member.

Wing Commander (AAFC) Gill made three consecutive toasts – to the Queen, to the AAFC, and to Number 6 Wing and its predecessor in the South Australian Squadron of the Air Training Corps – and formally thanked the members of the Ball Coordinating Committee.

Pilot Officer (AAFC) Rosenzweig concluded the night by saying, “I’d like to especially thank all the current-serving cadets who attended tonight – you are the people who will carry us forward for the next 25 years and hopefully be part of commemorating our centenary”.

From 1941, the RAAF had a facility at the old King’s College in Barton Terrace that supported the then Air Training Corps, part of the RAAF Reserve.

This wartime ATC was succeeded by the South Australian Squadron of another Air Training Corps (AirTC) as a youth development organisation.

This in turn became Number 6 Wing of the Australian Air Force Cadets (AAFC), with male and female cadets aged between 13 and 20 years. 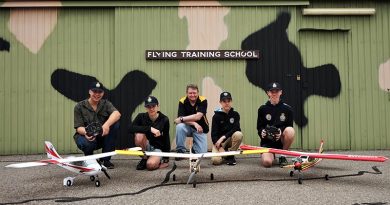 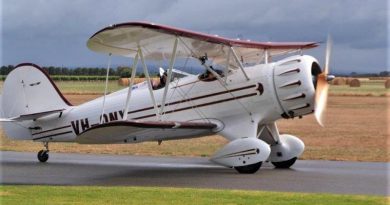