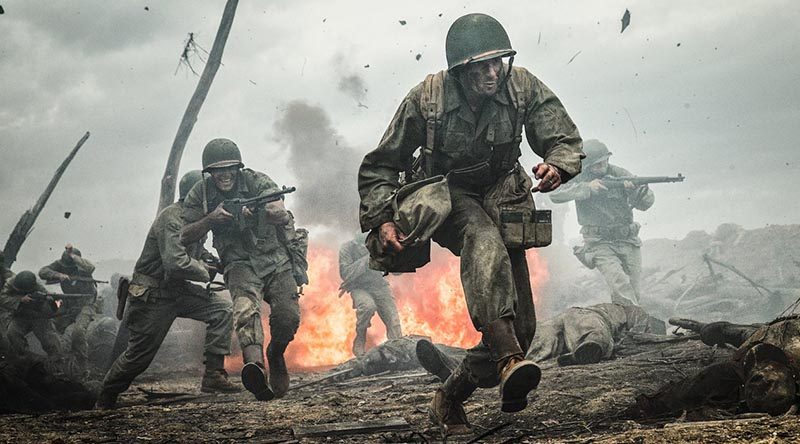 Private Desmond Doss who, for religious and family-history reasons, refused to touch a weapon after being drafted for WWII and went on to become the first conscientious objector* to be awarded the United States Congressional Medal of Honour.

Filmed in New South Wales, Australia, directed by Mel Gibson and staring a who’s who of Australian acting talent, Hacksaw Ridge is a true ‘Hollywood blockbuster’.

Yet despite the tendency to glamourise and exaggerate truths for the sake of entertainment, this is one Hollywood epic that I think actually falls short of capturing the true enormity of Desmond Doss’ heroism (as outlined in the citation, below – and noting he was also awarded three Bronze Stars for earlier actions in The Phillipines).

Don’t get me wrong, though – this 2-hour 20-minute movie is epic in scope, harrowing in it’s lengthy and realistic war scenes and, if you know nothing about Doss before the movie, really does leave you in no doubt that Desmond T Doss truly deserved the highest bravery award available.

But the movie only scratches the surface of this man’s bravery during the battle to take Hacksaw Ridge, a small part of the greater battle to take Okinawa, where more than 100,000 Japanese soldiers faced about 182,000 US troops and 1300 Allied ships in one of the last obstacles to the taking of Japan.

More than 77,000 Japanese soldiers were killed as well as up to half the 300,000 civilian population, of whom all males over 18 and nearly 1800 ‘middle school’ boys aged 14+ had been drafted as front-line fighters. Even schoolgirls were drafted to support the forces, as medics, couriers etc. And the capital city was all-but destroyed by bombers.

Doss, the unarmed-by-choice medic, dodged bullets from shell hole to shell hole for much of battle and is credited with single-handedly saving more than 75 comrades, including his own company commander, who had fought hard during training to get rid of the conscientious objector* who refused to carry a weapon.

Hacksaw Ridge, which was shot in NSW, Australia, is a Mel Gibson tour de force with many fine acting performances from a plethora of Australian actors. Hugo Weaving, as Doss’ alcoholic WWI-tormented veteran father was brilliant.

And ex-commando and double leg amputee Damien Thomlinson had several appearances, some of which involved using his missing legs, which must have been very poignant if not traumatic for the now actor.

He was a company aid man when the 1st Battalion assaulted a jagged escarpment 400 feet high.

As our troops gained the summit, a heavy concentration of artillery, mortar and machinegun fire crashed into them, inflicting approximately 75 casualties and driving the others back.

Private First Class Doss refused to seek cover and remained in the fire-swept area with the many stricken, carrying them 1 by 1 to the edge of the escarpment and there lowering them on a rope-supported litter down the face of a cliff to friendly hands.

On 2 May, he exposed himself to heavy rifle and mortar fire in rescuing a wounded man 200 yards forward of the lines on the same escarpment; and 2 days later he treated 4 men who had been cut down while assaulting a strongly defended cave, advancing through a shower of grenades to within 8 yards of enemy forces in a cave’s mouth, where he dressed his comrades’ wounds before making 4 separate trips under fire to evacuate them to safety.

On 5 May, he unhesitatingly braved enemy shelling and small arms fire to assist an artillery officer. He applied bandages, moved his patient to a spot that offered protection from small arms fire and, while artillery and mortar shells fell close by, painstakingly administered plasma.

Later that day, when an American was severely wounded by fire from a cave, Private First Class Doss crawled to him where he had fallen 25 feet from the enemy position, rendered aid, and carried him 100 yards to safety while continually exposed to enemy fire.

On 21 May, in a night attack on high ground near Shuri, he remained in exposed territory while the rest of his company took cover, fearlessly risking the chance that he would be mistaken for an infiltrating Japanese and giving aid to the injured until he was himself seriously wounded in the legs by the explosion of a grenade. Rather than call another aid man from cover, he cared for his own injuries and waited 5 hours before litter bearers reached him and started carrying him to cover. The trio was caught in an enemy tank attack and Private First Class Doss, seeing a more critically wounded man nearby, crawled off the litter; and directed the bearers to give their first attention to the other man.

Awaiting the litter bearers’ return, he was again struck, this time suffering a compound fracture of 1 arm. With magnificent fortitude he bound a rifle stock to his shattered arm as a splint and then crawled 300 yards over rough terrain to the aid station.

Through his outstanding bravery and unflinching determination in the face of desperately dangerous conditions Private First Class Doss saved the lives of many soldiers.

His name became a symbol throughout the 77th Infantry Division for outstanding gallantry far above and beyond the call of duty.

I’ve asterisked conscientious objector* above because, even though Doss refused to carry a weapon, he said he would willingly serve his country, wear a uniform, salute the flag and help with the war effort – but wouldn’t kill. He only agreed to register as a ‘conscientious objector’ because that was the only regulatory loophole that would allow him to actually join the Army and go to war, which he wanted to do. He had to fight very hard for his rights to be allowed to go to war, as a medic, unarmed.

Doss was the first ‘conscientious objector’ to be awarded a Medal of Honour. Two more were awarded in Vietnam – both were to medics – and both were awarded posthumously.

Desmond Doss, with a Medal of Honour, three Bronze Stars and three Purple Hearts, and badly disabled by his war wounds, tended a small farm in Georgia until his death in 2006, aged 87. 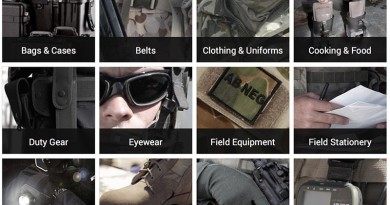 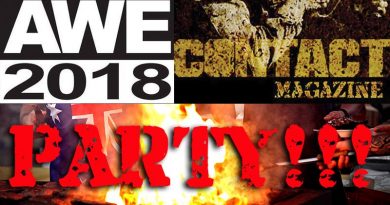 A party to remember*

2 thoughts on “Aussie blockbuster immortalises US Medal of Honour medic”