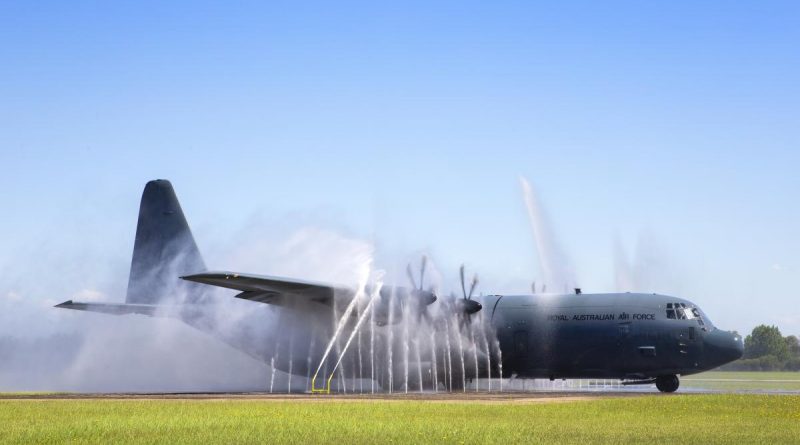 The first Royal Australian Air Force C-130J Hercules to be upgraded to Block 8.1 standard hardware and software has arrived home at RAAF Base Richmond.

CAPTION: The first No. 37 Squadron C-130J Hercules with Block 8.1 upgrades taxis through the bird bath after returning to RAAF Base Richmond. Photo by Corporal David Said.

The Block 8.1 system upgrade also includes safety improvements to the aircraft for RAAF’s No. 37 Squadron aviators.

The upgrade includes changes to the aircraft’s navigation systems, which will ensure greater accuracy during landing approaches particularly in our Asia–Pacific region and remote parts of Australia and when delivering cargo to a drop zone.

“Block 8.1 will make it easier for crews to operate the Hercules in a range of complicated environments, from civilian airspace around airports through to airfields on the frontline,” Group Captain Badgery said.

“Hercules’ crews have often been first on the scene during times of crisis, evidenced by the support delivered during the Kabul Airlift in August, and Block 8.1 will ensure the fleet can continue flying these operations safely.”

“Airbus Australia Pacific has already commenced the first local upgrade of an aircraft to Block 8.1 standard at Richmond, and the remaining fleet will be modified as they become due for major scheduled servicing.”

Air Force introduced its fleet of 12 C-130J Hercules to service in 1999. Capable of lifting approximately 120 passengers or up to 20 tonnes of cargo, the Hercules provides a medium tactical airlift capability for the Australian Defence Force between the smaller C-27J Spartan and larger C-17A Globemaster III.