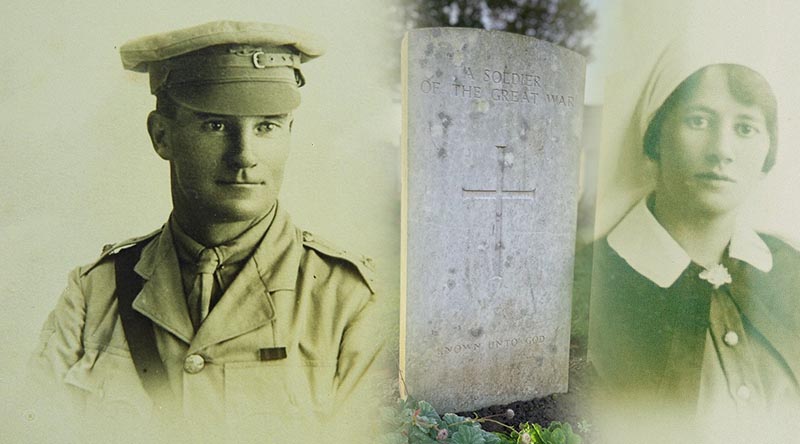 The body of a Victorian soldier killed in action during the First World War has been identified in an unnamed grave in France, more than a century after his death.

CAPTION: Lieutenant James Mark Kennedy, his grave site and Nurse Lottie Kendell whom he met on the troop ship to war and married in Egypt after surviving Gallipoli.

“Thanks to painstaking research over a number of years, Lieutenant Kennedy’s family now know his final resting place and he can be given the memorial he deserves,” Minister Gee said.

“It is pleasing that, as we commemorate Remembrance Day, we have been able to bring some closure to another Australian family whose loved one lost their life fighting for our nation.

“Born in Clarendon, Victoria and recruited in Queensland, Lieutenant Kennedy dedicated the majority of his life to service, including fighting in both the Boer War and the First World War.

“He was 37 when he was tragically killed near Flers on 5 November 1916, after his unit attacked German trenches near a defensive position known as ‘The Maze’.

“Due to the dangerous conditions from heavy bombardment and thick mud, Lieutenant Kennedy’s remains could not be recovered following the battle and he was commemorated on the Villers-Bretonneux Memorial.

“It is remarkable that after 105 years, his final resting place has now been identified.

“It says much about Australia that after more than a century we are still honouring our sacred national commitment to never forget those who gave everything for our nation.

“I want to thank Fallen Diggers Incorporated, the Office of Australian War Graves, the Australian Army, and the Commonwealth War Graves Commission, whose detailed research and support made this identification possible and has given some closure to Lieutenant Kennedy’s family.”

In consultation with Lieutenant Kennedy’s grandchildren, arrangements will be made to replace the previously unmarked headstone with one bearing his name and service details.

“Since 1987 I’ve tried here and there to search for information regarding my grandfather’s whereabouts. But like thousands of others like him, he vanished in the trenches,” Mr Kennedy said.

“I’d grown up with many stories of him from my father, so I think it’s fair to say he was lost but not forgotten.

“The love story between my grandfather and grandmother was a great wartime romance. It’s a great shame they weren’t able to be together very long, having only been married nine months.”

Margaret White, Mark’s sister and the granddaughter of Lieutenant Kennedy, said she was grateful and surprised by the news.

“I find it amazing they were able to discover my grandfather’s final resting place after so many years. I’ve got my grandfather’s medals, bugle, and other memorabilia at home and it’s quite incredible how much information is still available more than one hundred years later,” Mrs White said.

“I am hopeful I am one day able to visit my grandfather’s grave and pay my respects and continue to share these memories with my own children and grandchildren.”

The First World War remains the costliest conflict for Australian lives and casualties. With a country fewer than five million people, 416,809 men enlisted of which more than 60,000 were killed.

Lieutenant James Mark Kennedy was born in Clarendon in Victoria, on 16 April 1879.

He served in the Boer War with the South African Constabulary and enlisted in the Australian Army in the Queensland town of Miles in February 1915, being commissioned into the 26th Battalion.

On his way to Egypt aboard the troopship Kyarra, he met Australian Army Nurse, Charlotte ‘Lottie’ Kendell from Geelong.

After serving at Gallipoli, Lieutenant Kennedy returned to Egypt and married Lottie on 29 February 1916.

In March, Lieutenant Kennedy deployed to the Western Front with his unit and while he was there, Lottie gave birth to a son they named William ‘Bruce’ Kennedy on 23 June 1916.

Upon his return to France, Lieutenant Kennedy was seriously wounded at Pozieres in late July 1916 and was invalided to the United Kingdom. He was able to spend a short time recovering with his new wife and son in Scotland. Despite Lottie urging her husband to accept a safer staff role, he insisted on returning to his men and re-joined his Battalion in October 1916.

This would be the last time Lottie and baby Bruce would spend together with James.

Three weeks later on 5 November, while leading his Platoon during the Battle of Flers, Lieutenant Kennedy was killed.

Lottie returned to Geelong, Australia and never remarried, passing away following injuries due to a traffic accident in 1970.

Lieutenant Kennedy’s remains could not be recovered following the Battle of Flers and he was commemorated on the Villers-Bretonneux Memorial.

In 1925, an Australian Officer wearing a medal ribbon indicating service during the Boer War was recovered from the location that Lieutenant Kennedy was last seen, and buried nearby at Cabaret Rouge British Cemetery, Souchez.

At the time, the soldier was not able to be identified and was buried in an unnamed grave.

Recent investigations by Fallen Diggers Incorporated determined that Lieutenant Kennedy was the only Australian Officer missing in the vicinity of his death who had been awarded a medal for Boer War service. All other Officers were ruled out, allowing his identity to be conclusively established.

Further information on Unrecovered War Casualties is available on the Army website.

One thought on “Soldier from WWI identified”