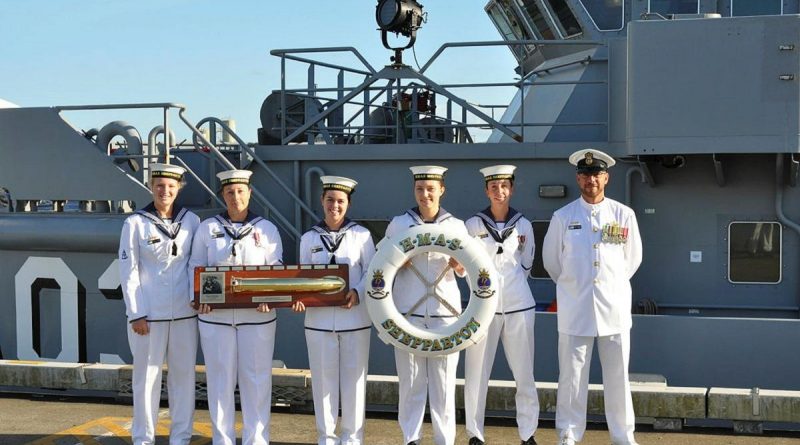 The title, recognising the longest-serving commissioned ship in the fleet, was handed over to Shepparton at a ceremony at HMAS Cairns following the decommissioning of HMA Ships Paluma and Mermaid in September.

Commanding Officer Shepparton Lieutenant Commander Andrew Shiels said the vessel was in her 31st year of commissioned service and the crew was honoured to take possession of the prized First Lady of the Fleet plaque.

“The previous First Lady, HMAS Paluma, served the fleet with pride until its recent decommissioning and we will aim to continue the tradition as we fulfil our hydrographic role within the fleet,” Lieutenant Commander Shiels said.

The plaque is made up of pieces from previously decommissioned ships.

The voice pipe and base are from HMAS Sydney IV, the border from HMAS Gladstone and the corner pieces from HMAS Duchess.

The plaque also features an image of Nancy Bentley, from Tasmania, who is recognised as being the first female to serve in the Navy.

In 1920, six-year-old Nancy was bitten by a snake and was in urgent need of medical treatment.

Looking for help, her father rowed her to HMAS Sydney I at anchor off Port Arthur.

At the time, medical treatment in the Navy was reserved for members of the ship’s company, so the commanding officer of Sydney ordered that Nancy be formally enlisted in the RAN so she could receive medical care.

The tradition of awarding the First Lady of the Fleet title began in 1997 to recognise Nancy’s story.

HMAS Shepparton II was built in Adelaide and commissioned on January 24, 1990.

Shepparton is a 36.6m, 325-tonne catamaran designed for coastal surveying in waters around Australia and Papua New Guinea.

The ship also provides hydrographic support to operations and exercises.

In 2000, Shepparton deployed in company with HMAS Benalla to Timor-Leste on Operation Tangar.

As the new First Lady of the Fleet, Shepparton’s crew will continue to live up to the ship’s motto of ‘By Wisdom and Courage’. 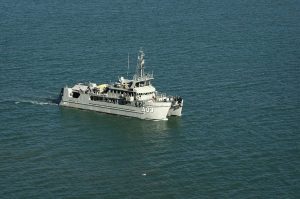 Thales Research and Development Team in Lithgow to double 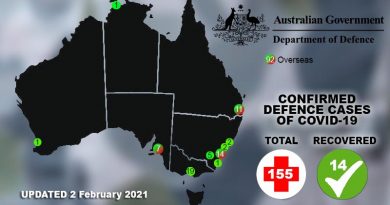