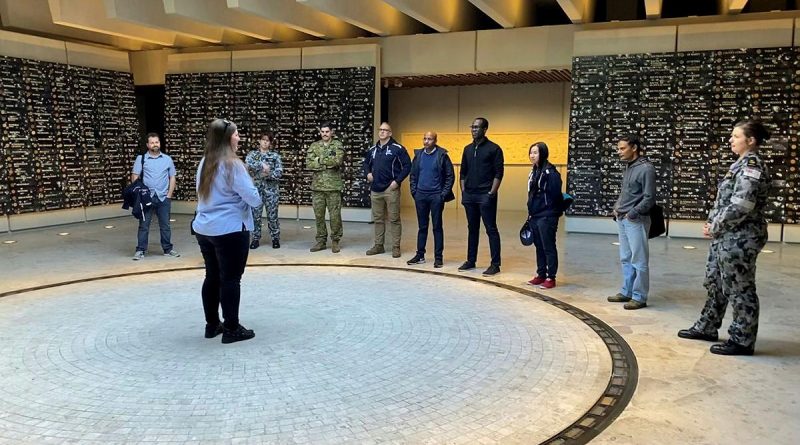 Cyber students can further their skills through the Australian Defence Force Cyber Gap Program (ADFCGP) while also learning about career opportunities in Defence.

The Australian Government announced the program in 2019 as part of its cyber-resilience and workforce package.

The pilot intake began the program last year and the final intake will finish the program in 2023.

The 12-month online program is being delivered by the Joint Cyber Directorate and is open to Australian citizens undertaking tertiary cyber-related qualifications, from Certificate III level through to a Masters.There is no obligation for participants to join the ADF.

The program is run in conjunction with the Australian Public Service Digital Profession and aims to boost Australia’s sovereign cyber workforce capability.

Navy hosted a group of ADFCGP participants in Sydney for a week earlier this year, giving them an opportunity to better understand Navy cyber careers.

Andrew, a cyber student at the Canberra Institute of Technology, said he appreciated the insight into how cyber skills were being used in Defence.

“This has been a fantastic experience and I look forward to hearing more in the future about the roles to be released next year,” Andrew said.

During the work experience program, Defence Force Recruiting gave the students a brief, which focused on Defence jobs.

Additionally, the team was given a presentation by personnel from the Joint Cyber Security Centre, who spoke about other Australian Government agency pathways.

The group visited the Fleet Base East Centre for Innovation (CFI), which was opened by the Chief of Navy in June 2017. The second centre was opened at Fleet Base West in April 2019.

The aim of the CFI is to encourage experimentation and innovation.

The students were able to experiment with 3D printing, robots, drones, autonomous and crewless technology, showing how Navy is turning state-of-the-art concepts and technologies into reality.

Amy, who is studying at Swinbourne University, said she appreciated seeing the capability of the CFI.

“I thoroughly enjoyed my first real exposure to the Navy. I look forward to seeing the Navy’s continuous contribution and evolution in the cyber and information warfare space,” Amy said.

The Fleet Cyber Unit (FCU) also hosted the students and they learnt about the roles within the FCU, including incident response and vulnerability analysis.

They were able to participate in malware and analysis activities and operate the Grace Maritime Cyber Testbed for Operational Technology (OT).

OT uses hardware and software to monitor and control physical devices and infrastructure.

The testbed platform is the first of its kind to train cyber operators in vulnerability detection, analysis and mitigation for engineering, steering and platform management subsystems.

Participants took part in other activities during the week, including visiting HMAS Penguin’s Weapon Training Simulation System, the RAN Medical School training facility and personnel from the Amphibious Watercraft Squadron gave the students a cruise around the harbour on a landing helicopter dock landing craft.

The week ended with a tour of HMAS Brisbane, the second of three Hobart-class guided-missile destroyers.

Applications are open for next year’s intake and 300 positions are expected to be offered.

Australian Public Service Commissioner and Head of Professions, Peter Woolcott, said the program provided an opportunity for students to immerse themselves in short work exposure experience with Defence while they studied.

“If you are passionate about cyber security and enthusiastic about turning your skills into a career supporting the Australian Defence Force, this is the program for you,” Mr Woolcott said.

“The skills and expertise of these students will benefit the nation greatly, whether they choose to join Defence after the program or not.”

The program can provide financial support for course fees, along with career mentoring sessions, and development opportunities through online cyber skills challenges.