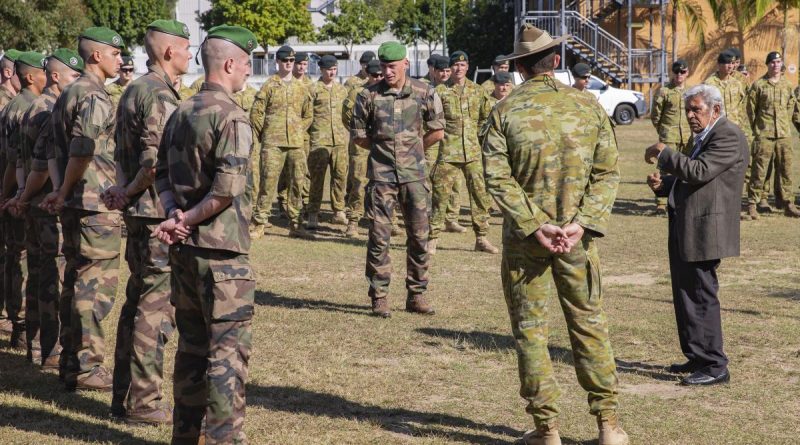 Soldiers and officers from the French Armed Forces in New Caledonia (FANC) have arrived at Gallipoli Barracks to begin training with the 6th Battalion, Royal Australian Regiment, for Exercise Peronne.

Following their mandatory two weeks of quarantine, the FANC contingent of 28 received a warm welcome from local Indigenous elder Uncle Desmond Sandy, who performed a Welcome to Country ceremony.

Familiarisation training at 6 RAR soon began, so they can integrate with Alpha Company and the rest of Brisbane’s 7th Combat Brigade on Exercise Diamond Dagger.

FANC Contingent Commander Captain Paul said he was eager for his soldiers to learn in an environment completely foreign to them, in a country which has fought side by side with France since World War I.

“The aim is to work together with 6 RAR’s Alpha Company to see how they work, show them our procedures, and work together to improve,” Captain Paul said.

“We are good soldiers, we’re very happy to improve ourselves on Exercise Diamond Dagger.

“The environment is new, none of us have been here before, it’s a new field training area, a new ‘enemy’, but I’m confident we will be able to work well alongside Alpha Company.”

Commanding Officer 6 RAR Lieutenant Colonel Richard Niessl said the FANC contingent were eager to take advantage of their time in the Australian bush.

“They’re young, they’re energetic, they’re motivated, they’re keen to be here, they’ve got the same level of enthusiasm for being in Australia as we would have if we had the opportunity to go to France or New Caledonia,” LTCOL Niessl said.

“This week they’ll do their integration with Alpha Company, including training on the vehicles, weapons training, some physical training sessions, so we can commence Exercise Diamond Dagger next week.

“We’ll do the field-based integration over the next few weeks.”

LTCOL Niessl said combined training with the FANC was important.

“The most important thing is that we strengthen our relationship with the French Armed Forces, we build stronger connections, develop our interoperability, and learn from each other,” he said.

“Strengthening the connection between our two nations is vital, so when we do need to work together in the future, the foundations are already in place.

“The FANC contingent have been excellent, they fit in perfectly, and they’re very eager to learn.” 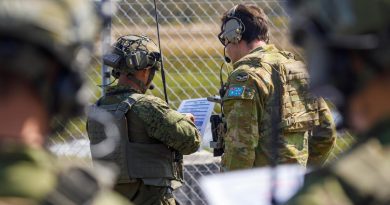 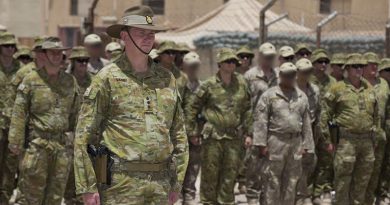