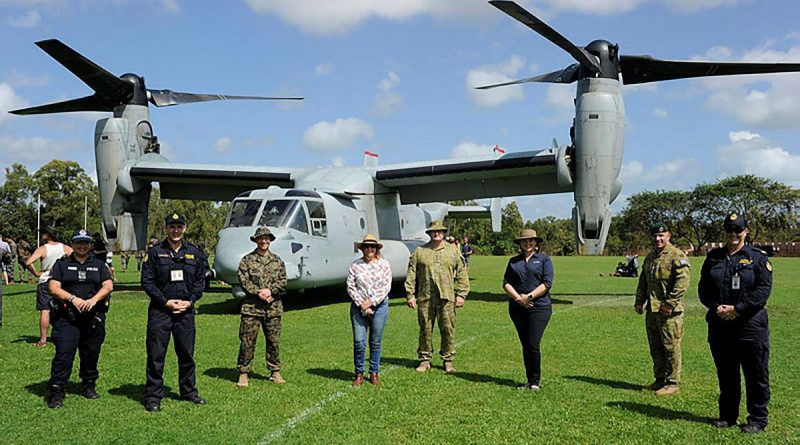 Soldiers from the ADF and Marines from the Marine Rotational Force – Darwin (MRF-D) recently completed a training exercise to enhance how both Australia and the United States can swiftly respond together to a crisis scenario in our region.

CAPTION: Community leaders and representatives from the NT Police and Australian Border Force stand with ADF and US Marine Corps members in front of an MV-22B Osprey. Story by Lieutenant Gordon Carr-Greg.

Exercise Darrandarra, facilitated by exercise planning and support staff from Headquarters Northern Command, took place in the Nhulunbuy region of Arnhem Land, part of the Gove peninsular in the Northern Territory.

It involved rapidly deploying Marines to a simulated security-crisis scenario, embassy reinforcement and evacuation, more than 600km east of Darwin.

“The exercise was a tangible demonstration of the ability of Australia and the United States to swiftly respond to a crisis scenario using unique capabilities brought together by each of the forces,” Lieutenant Colonel Gosling said.

“It has been a terrific opportunity to test the ability of our forces to respond to a security crises in the region, with a focus on enhancing tactics, techniques and procedures and achieving mutual interoperability objectives between the ADF and United States Marine Corps.”

Exercise controller Lieutenant Bryce Williams said the training was a unique opportunity to build on the Defence connection to its First Nations peoples.

“The Australian Army has been part of the Arnhem Land community for almost 100 years,” Lieutenant Williams said.

“The exercise was planned and conducted in consultation with community leaders and government stakeholders in the area.

“Having the opportunity to engage with the welcoming Nhulunbuy locals and the chance for our Marine colleagues to experience some Indigenous culture and ceremony was an equal highlight.”

“The support from community leaders, Elders and other members was key to successfully conducting the exercise. Their support is acknowledged and appreciated,” Colonel Constable said.

“The exercise concluded with a community event where Nhulunbuy locals were able to meet and interact with Marines and the ADF, as well as get up close with an MV-22 Osprey.”

The ADF and MRF-D acted in accordance with COVID-safe protocols in the Northern Territory, and all United States Marines were subject to strict screening and quarantine requirements before their entry into Australia, as well as health checks before participating in the exercise. 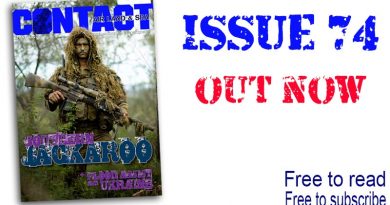