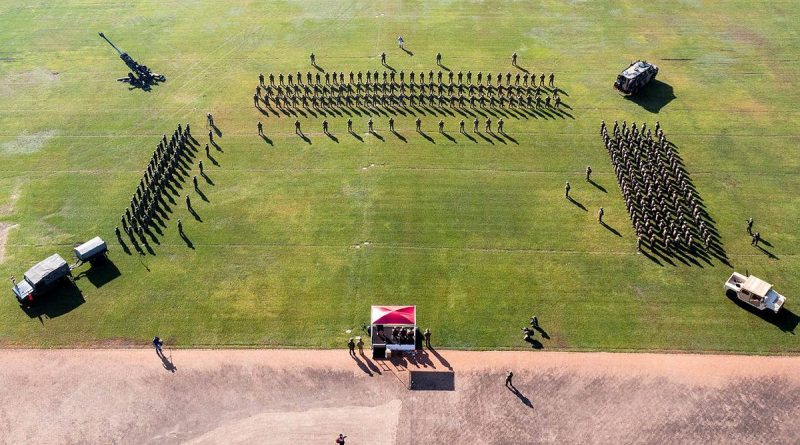 Soldiers from the 1st Brigade, the Japan Ground Self-Defense Forces and the United States Marines stood shoulder-to-shoulder during the opening ceremony parade of Exercise Southern Jackaroo on June 15.

Commander 1st Brigade Brigadier Ash Collingburn said the 10-day combined-arms exercise, held at Mount Bundey Training Area in the NT, would reinforce cooperation between the three countries, and will ensure the nations are ready to maintain peace and prosperity in the Indo-Pacific region.

About 400 ADF personnel, 300 marines and 60 Japanese soldiers will participate in the exercise, predominately from infantry, artillery and engineer corps.

Brigadier Collingburn said the exercise would feature the introduction of unmanned aerial systems and a trilateral sniper live-fire activity, signalling an increase in complexity from previous years.

“We achieve a lot of interoperability benefits from working with the marines – we use the same artillery pieces and a lot of our procedures are the same,” Brigadier Collingburn said.

“The Japanese bring some great weapons, like their anti-tank system, which can integrate with an Australian or United States-led combat team to provide a heavy firepower capability.”

Troops from the three nations took part in cultural activities, including a Welcome to Country incorporating an Indigenous smoking ceremony at the opening of the exercise held at Robertson Barracks, NT.

Japanese troops conducted a live-fire practise of their anti-tank missile on the first day of the exercise, which will culminate in a combat-team, live-fire activity beginning June 19.