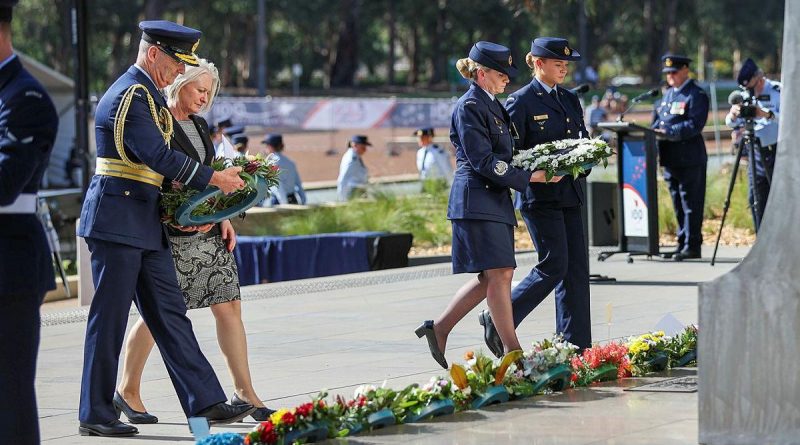 The last time Margaret Radford saw her brother, Flight Sergeant Elliot Burton, he was waving goodbye through a train window as it lumbered away from the platform.

In the coming years, Flight Sergeant Burton completed his training, fell in love with a Canadian woman and joined the Royal Air Force’s No. 122 Squadron.

His fighter exploded in the air on a mission to destroy an oil plant in Germany.

Mrs Radford was 16 when she answered the door of her home and received the telegram about her brother’s death.

Chief of Air Force Air Marshal Mel Hupfield recounted the story to hundreds of RAAF personnel and dignitaries who attended the commemorative service at the RAAF memorial in Canberra on March 30 to mark Air Force’s centenary.

“She remembers the devastation on their [her parents’] faces when they found out their 22-year-old son had been killed,” Air Marshal Hupfeld said.

“His P-51 Mustang exploded over Belgium, killing him instantly.

“She said that decades later, aged in her 90s, she still misses him every day.”

Air Marshal Hupfeld spoke about the men and women who served over the past 100 years, highlighting Margaret Radford and her brother to cast light on the sacrifices of the fallen.

“Near here at the Australian War Memorial, there are the records and names of 11,191 RAAF people who have died in the service to their country,” Air Marshal Hupfeld said

“Each one of those people have stories attached to them like Margaret’s.

“This is the story of the Air Force I want to mark today.”

A small crowd of onlookers joined the service from afar.

Among them was Grant Sebastian, son of Jeffrey ‘Jerry’ Graham Sebastian, an Air Force photographer who served with the 78th Fighter Wing RAAF.

Mr Sebastian said he was delighted his father’s photographs were featured in the event’s brochure.

“Dad joined five days after his 18th birthday and retired one day before his 65th,” Mr Sebastian said.

“He was a flight lieutenant by the end.

“He used to tell a story about a photo in Sinai and how they did two or three hours of flying around to get a helicopter over a tank.

“It was a great old story, but these stories have passed now that he has passed on.

“It was nice to walk down and see all this [his photos],” he said.

Air Marshal Hupfeld was joined at the service by Governor-General General (retd) David Hurley, Chief of the Defence Force General Angus Campbell, service chiefs, ministers and dignitaries, who paid their respects to fallen RAAF men and women by laying wreaths, before a minute’s silence and a flypast of heritage RAAF planes.

Air Force’s centenary events continued with a flypast of more than 60 historic and modern aircraft in Canberra on March 31. 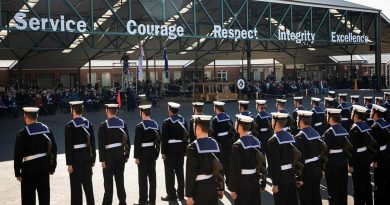 Families back on deck at parade 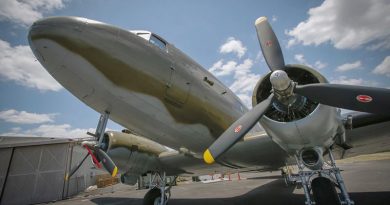