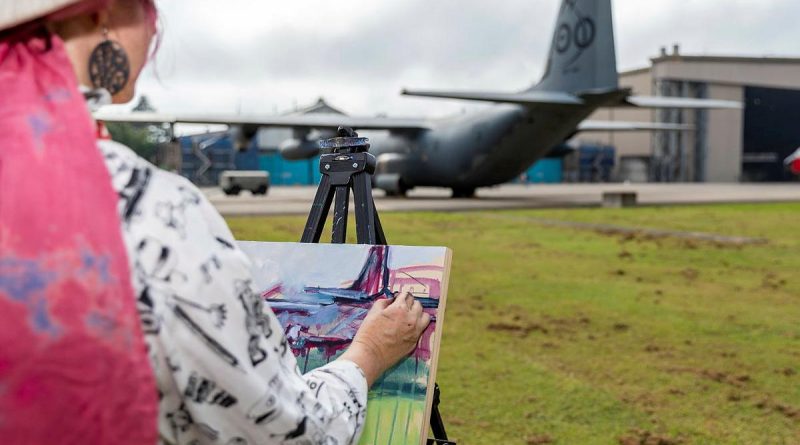 Artists from the Hawkesbury region of Sydney visited RAAF Base Richmond on March 13 for a rare opportunity to create artworks.

CAPTION: Mellissa Read-Devine, of the Ferry Artists Gallery, paints a RAAF C-130J on canvas with acrylic during the RAAF Base Richmond Artists’ Day. Photo by Corporal Dan Pinhorn.

As part of the base’s Air Force centenary activities, seven artists were invited to set up their canvases and easels on an area of the tarmac for the day.

The area also featured the base’s air traffic control tower, historic hangars and a view of the Blue Mountains.

Senior ADF Officer for RAAF Base Richmond Air Commodore Carl Newman said there was a rich artistic tradition in the Hawkesbury area.

“We have a number of galleries and artist groups in the Hawkesbury, all featuring various works that illustrate the region and its community,” Air Commodore Newman said.

“It’s not easy for RAAF Base Richmond to be recorded by local artists, largely in part because of our security requirements and operational tempo.

“The Artists’ Day allowed us to engage with creative elements of the wider community, and create a historical record of RAAF Base Richmond that will be of interest to many as we progress into Air Force’s next century of service.”

Across RAAF Base Richmond, many of the squadron buildings and messes feature existing artworks illustrating the history of the Air Force and the local area.

The last artist to visit the base was the late William Wells, who sketched and painted scenes from RAAF Base Richmond in the late 1990s and 2000s.

“Following the success of this Artists’ Day, we want to cooperate and engage with other community groups to highlight our Air Force centenary,” Air Commodore Newman said.

“The Artists’ Day could be supported flexibly, was easy to achieve compliance with COVID-19 restrictions, and allowed us to highlight the Air Force centenary theme of ‘Then. Now. Always’.”

For the artists, the event was a welcome opportunity to add the base to a landscape that includes the Hawkesbury-Nepean River, the Blue Mountains, and the Cumberland Plain.

Carol Gill of the Ferry Artists Gallery, who participated in the Artists’ Day, said there was an endless variety of landscapes in the area to gain inspiration from.

“It is no surprise that we have many art groups and societies in this region, as well as many prominent past and contemporary artists for whom working plein air is a major feature of their work,” Ms Gill said.

“To be able to visually record the base precinct and the aircraft was a special opportunity that I could not miss.

“The impressions an artist makes provides a different viewpoint with which to witness the present, and this is historically valuable.”

While aircraft and hangers aren’t traditionally features of her work, Ms Gill said she was inspired by the aircraft to push the boundaries of her discipline.

“The art day was for me a chance to be inspired by the unusual and respond to that inspiration, and I look forward to developing further the work I started at the base,” Ms Gill said.

The artworks created at RAAF Base Richmond on March 13 will remain the property of the artists, with the intent being to feature them in local galleries and exhibitions. 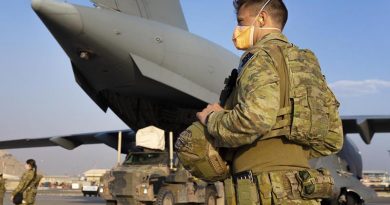 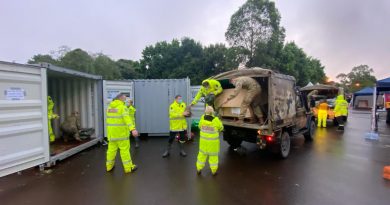 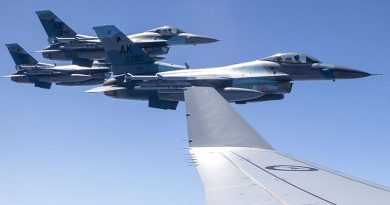