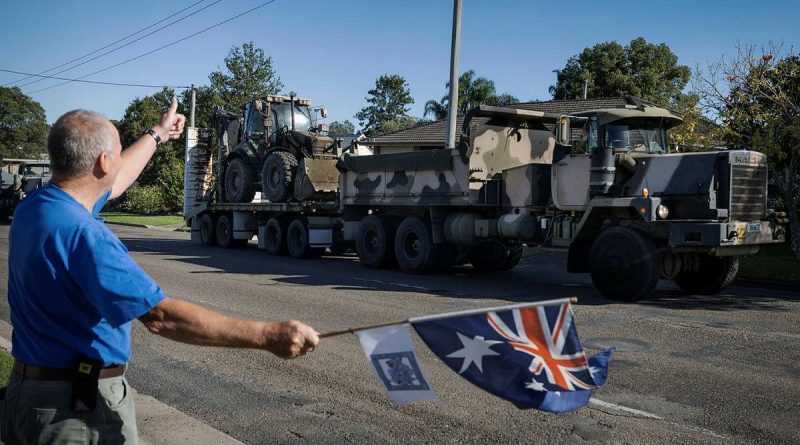 Seventy-year-old Darcy Elbourne made sure he was on hand to welcome ADF personnel to Macquarie Barracks in Taree last weekend.

CAPTION: Darcy Elbourne waves the Australian flag in the driveway of his home as Army personnel head out to conduct relief and recovery tasks during Operation NSW Flood Assist in Taree. Photo by Corporal Sagi Biderman.

The Army deployed to the town on Operation New South Wales Flood Assist.

Mr Elbourne, who served as a reservist in the Army, has lived in Taree all his life, and opposite the barracks for 49 years.

He and wife Margaret stood in their driveway on March 28 and waved the Australian flag as a convoy headed out to conduct relief and recovery tasks in the flood-affected regions of the district.

“The spirit of the flag is to let the troops know that we are appreciative of them, which is what it is all about – letting them know we support our service men and women, our ADF,” Mr Elbourne said.

“I think when they see the community responding, they know that their work is appreciated.

“The effects of this flood have been horrific, with the damage and inundation being a one-in-100-year event for us and water higher than I have ever seen.

Mr Elbourne said many houses and farms in the district were extensively damaged by the floods, which also killed livestock and destroyed feed.

“It fills me with pride to see the Army barracks across the road filled with camouflage, uniforms and lots of vehicles and support,” Mr Elbourne said.

“For us, it is like the cavalry coming – our emergency services, fire department, police force, ambulance service and SES have all done a wonderful job, and now to have the strength of the Army to complement their efforts with manpower and equipment, it is really helping out and it has been an excellent asset.

“Seeing the convoy outside (my house) reminded me of my days as the company sergeant major of the depot here in Taree, a responsibility which included holding the keys to let in visiting units and personnel to the base.

“With all the action and support for our community, I was wishing I could almost put the uniform back on and travel out with them.”

Mr Elbourne enlisted in the Army in 1970 and served for 20 years in the Royal NSW Regiment at Macquarie Barracks while working in his civilian job at the local hospital.

He said his service was inspired by the service of his grandfather and father.

His grandfather served in World War I at Gallipoli and the Somme, where he was wounded in action, while his father served with the Air Force in New Guinea during World War II.

“A key highlight during my service was to be awarded the Prince of Wales Award in 1987, serving overseas in England with the 3rd Battalion, Queens’ Regiment, on Salisbury Plains,” Mr Elbourne said.

Mr Elbourne now serves as an advocate for veterans as the vice-president of the Taree RSL Sub-Branch. 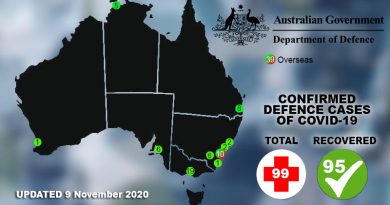 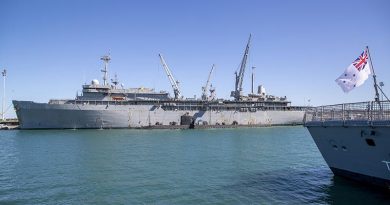 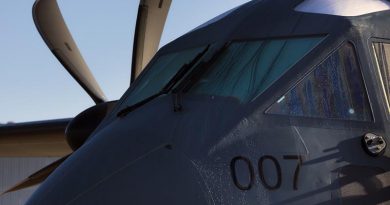