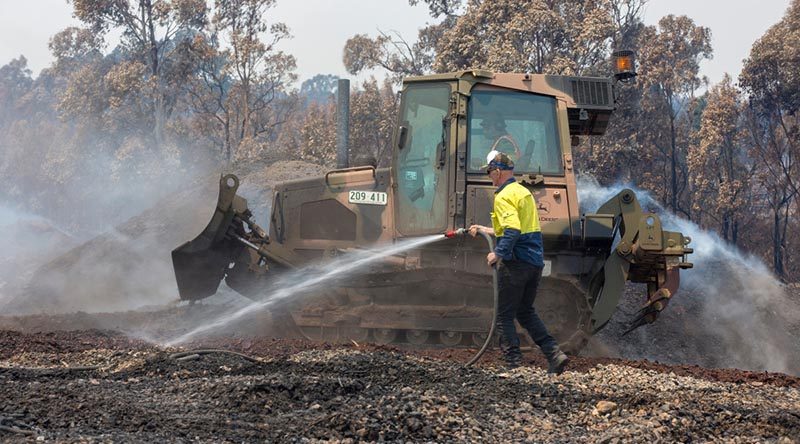 The smell of burning mulch assaults the senses as you approach smouldering piles of waste at Eden’s woodchip mill.

CAPTION: An Australian Army Combat Engineer from the 5th Engineer Regiment uses a JD-450 Bulldozer to spread burnt woodchips at the Eden Woodchip Mill in southern NSW in support of Operation Bushfire Assist 19-20. Photo and story by Sergeant Max Bree.

Large Army bulldozers traverse the pile, back and forth across the smoky landscape, scraping mulch as they go.

Streams of water follow one bulldozer as NSW firefighters douse the thinned-out mulch, stopping smoke clouds emerging from the pile.

The piles today are mild compared to the hellscape confronting Lance Corporal John Carroll and his section of plant operators from the 5th Engineer Regiment when they arrived on January 10.

“This was an operation composting byproduct of the chip mill that caught alight during the fires,” Lance Corporal Carroll said.

“There was about 30 large stockpiles covering about six footy fields all alight, fairly large plumes of smoke coming off them, some on fire and some smouldering.”

The sappers set to work with two Army bulldozers and one civilian rental, thinning the piles so they would be easier to extinguish.

“In some cases it’s taking hundreds of litres of water just to cool the earth below,” Lance Corporal Carroll said.

“They would have most likely burned for months creating pollution, but there was potential on a windy day for sparks to be blown into unburnt areas and create more bushfires.”

At first, sappers were assisted by a contractor dousing mulch with the chip mill’s water cart, until they liaised with Fire and Rescue NSW, which had spare fire trucks that could sometimes help.

“They made a huge difference to the speed of the task.

“One of the biggest issues was getting enough water in to extinguish the piles, so having them on board was great, they’ve been really helpful.”

Four days after arriving, large sections of the mulch no longer smoulder and the plant sappers move their dozers around the pile extinguishing small hotspots. 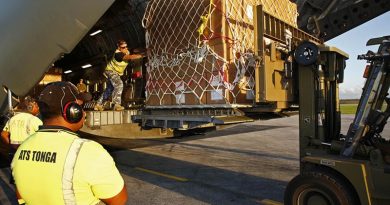 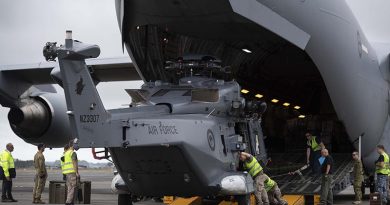