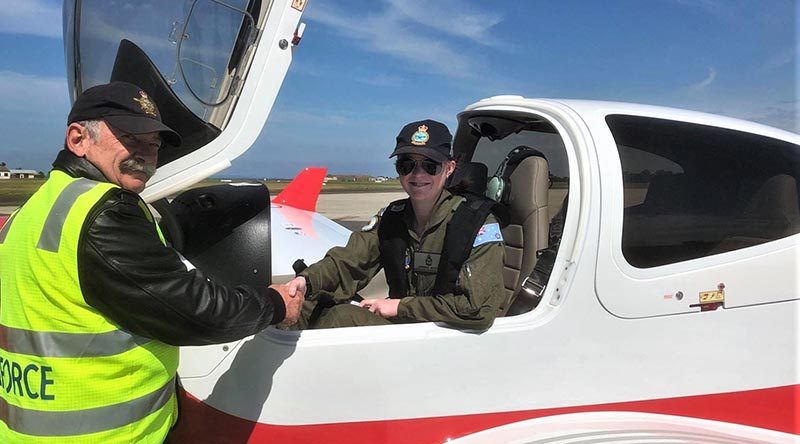 During the recent September-October school holidays, a select group of Air Force Cadets took to the skies in the new Diamond DA40 NG training aircraft.

One of the nine who achieved solo status was Cadet Corporal Jessica Scott from No 623 Squadron, Mildura, Victoria.

The Diamond DA40 NG light aircraft have been leased for exclusive use by Australian Air Force Cadets. The DA40 NG features modern avionics and a turbocharged jet-fuel piston engine, with contemporary navigation and flight control systems.

Powered flying training is managed through the Elementary Flying Training School at RAAF Point Cook, operated by the Australian Air Force Cadets with support from the RAAF.

“During WWII, I had three great-grandparents serving in the RAAF”, CCPL Scott said.

“My great-grandfather on my dad’s side was a Flying Officer and served as an Air Gunner in a Catalina, and later became a pilot. After WWII ended, he piloted an altitude test in a Liberator over Melbourne which took him an hour and a half to reach 32,000 feet (6 miles – almost 10 km)”.

Following the family tradition, on 5 October, CCPL Scott was one of the Cadets awarded her wings at EFTS Point Cook after completing her first solo flight in the diamond DA40.

Of her experience of flying the Diamond, CCPL Scott said: “My first flight in the DA40 was amazing. I had never been in an aircraft with such modern technology like the Diamond has”.

“When I took the controls for the first time, my heart was pounding and I was so scared that I would mess it up.”

Of flying solo, she said: “Going solo was a surreal moment”.

“Up to that point, the thought of going solo terrified me because there would be no instructor in the plane with me in case I made a mistake.

“However, actually going solo, I didn’t feel terrified, I felt so excited that I had made it to being able to go solo.

“It was definitely strange though, being by yourself in the plane for the first time, after spending two weeks flying with an instructor.”

CCPL Scott reflected on what her service in the AAFC had taught her: “Cadets has taught me that it is possible to achieve your dreams even if they may seem out of reach at the time. It has taught me to always have confidence in yourself and that if you put your mind to it, you can achieve most things”.

Congratulations to CCPL Scott and this newest batch of DA40 pilots.