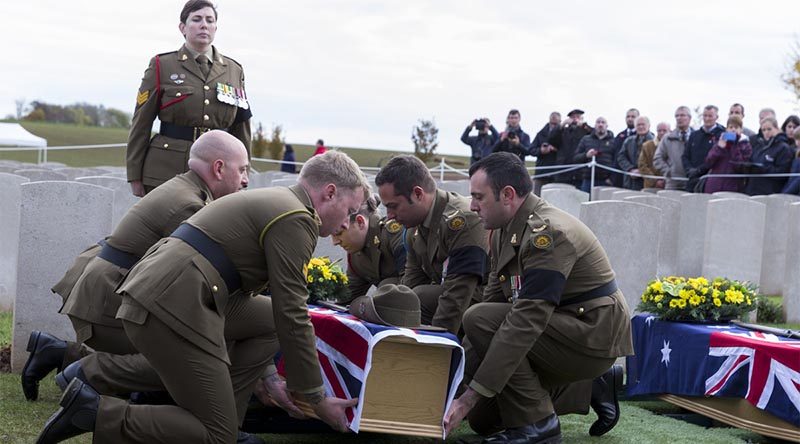 The remains of two World War One Australian soldiers previously recorded as missing, then killed in action in 1917, have been identified and re-buried yesterday at a ceremony in France.

CAPTION: Australian Army pallbearers lower the coffin of a recently identified Australian soldier to his final resting place, at Queant Road Cemetery, France, more than 100 years after he was killed in action on the Western Front. Photo by Leading Seaman Nadav Harel.

A 12-person firing party fired three volleys as the coffins were lowered into the ground.

Mr Chester said he felt deeply honoured to be able to pay his respects to the fallen men.

“It is a rare privilege to be a part of a ceremony so important to two Australian families,” he said.

“Their loved ones have been returned to them and buried with full military honours.

“It is a measure of who we are as a nation, that we continue to strive to find, recover and identify our missing service personnel.

“It is a sacred duty, which honours all who serve and have served.

“I wish to pay tribute to the work of all the many individuals, volunteer groups and organisations involved in the identification of Lance Corporal Rolls and Private MacBeth.

“Without their tireless work we would not be able today to recognise the service of these soldiers.”

On 23 May 2015, the remains of the two then-unknown Australian soldiers were discovered.

Born in Prahan, Victoria, Lance Corporal Rolls was a draper by trade until his enlistment in the Australian Imperial Force on 17 July 1915 at the age of 22.

Private MacBeth was born in Launceston, Tasmania, where he was employed as a rubber worker until he joined the AIF at age 30, in January 1916.

On 3 May 1917, an artillery shell exploded in the dugout both soldiers were located in.

They were both reported ‘Missing in Action’ and later declared ‘Killed in Action’.

The Unrecovered War Casualties-Army team are still collecting information about WWI soldiers who died and whose graves are listed as unknown.

Members of the public who have a relative that fits this profile are encouraged to register with the UWC-A team online at https://army.govcms.gov.au/forms/uwc-a-online-registration-form. 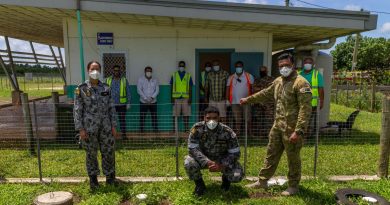 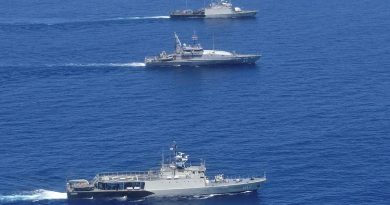