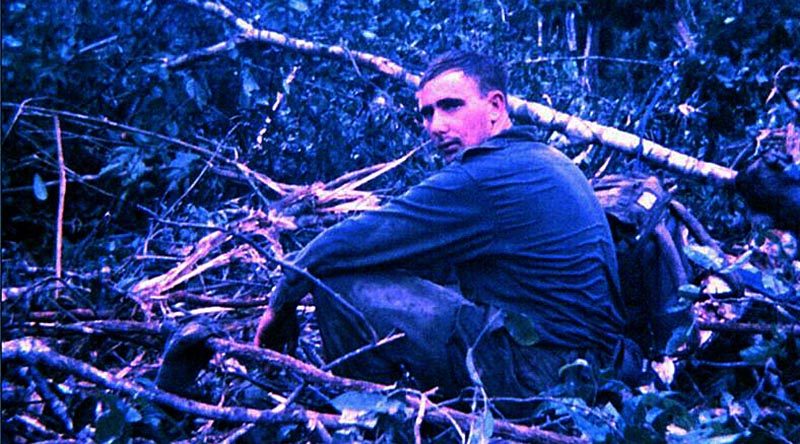 You know how your mood changes during the working week?  Who likes going to work on Mondays?  Isn’t that where the word Mondayitis comes from?  But as Friday approaches you start to look forward to the weekend and getting away from work.

Well it was the same in Vietnam.  We had been in country 10 months now, probably at the low point in the week so to speak, we are looking forward to only two months of patrolling; and we are home free.

But all this did was to increase the pressure for us to survive.  To keep risk to a minimum, to be cautious; but at the same time not to back away from a fight.

2 Platoon has completed 290 days on operations so far and I didn’t realise the toll it was taking on us until I was looking at some photos the other day. 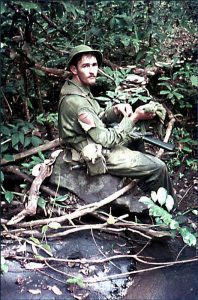 Smithy is ringing wet, not because of the rain, but from sweat, because of the exertion and pressure of being a forward scout.  You may recall I did three days in the Nui Dinhs and that was enough for me.  Both Smithy and Browny did it for 12 months!

Browny won’t be happy with this photo.  As you can see he is totally stuffed.  There’s nothing more for me to say –  a picture is worth a thousand words.

Both of these photos were taken by Digger, he is not fairing too well either.

Digger (below) looks like he needs a decent feed, a good lie down; and a shave as well! 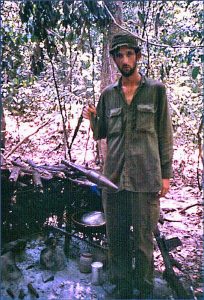 These are stark images indeed!

Digger is seen here holding an RPG (rocket propelled grenade).  This item was among many things we found in an enemy camp.  As you can see by the fire place, the camp was in use for some time although not recently.

I don’t have to tell you that we are again east of Route 2.  As our time is getting short we are operating more now as a company group – there is safety in numbers, particularly after the mauling we got from D445.

Well they got a mauling too.  We used to patrol in half platoon numbers of about 10 to 12 soldiers back over in our AO west of Route 2, but over here it seems the enemy have had a bit of a free reign – we have no idea what we will be up against; so we’ll play it safe and stick together as a larger group.

The area was not jungle, just dried-out bush.  The dry season has taken its toll on the vegetation which means there is less shade and it is quite hot with the sun’s rays penetrating though the canopy.  Patrolling in these conditions is gruelling.

As we patrol through the dried-out scrub, a lot of debris in the form of leaves, sticks and dust falls down and lodges on the back of our necks.  There it mixes with our sweat and gets ground into our flesh by our webbing.  We use sweat rags to cover the backs of our necks but it is still very uncomfortable, especially if the next shower is three weeks away.

From the company base, 2 Platoon patrolled out on our assigned route.  One of the other platoons was doing the same thing in a different direction while the third platoon nursemaided CHQ.  You should be familiar with this now.  The radio I am carrying does not get much use when we are all travelling together and it was here that I was being a bit lax.  I assumed that the battery would be OK.  A bad mistake. Because we were travelling light I didn’t carry a spare battery with me, it was in my pack.  Prior to our departure I conducted a radio check with One Zero and everything seemed to be working OK.

About 200 metres out, the scrub opened up, there was a marked reduction in undergrowth, a clear sign of enemy activity.  We inched forward very cautiously.  The forward scouts working overtime for signs of enemy and mines and booby traps.  We propped and the boss went forward to have a look around.  I tried to raise One Zero but even though I could hear them OK I could only transmit for a second or two.  The fucken battery was flat.  How stupid was I?  If we contacted the enemy we’d be in deep shit and here we are with evidence of enemy activity right in front of us.

I was able to transmit the words ‘flat battery’ without any other words normally associated with radio procedure and mother, the CSM, understood and said he was sending a fresh battery out to us.  We were only 10 minutes away and our tracks would be easy to follow.  Boy was I lucky.

The camp was empty and had been like that for more than a week.  We had a good look around, wary of booby traps, but we found a fair bit of stuff.  Some weapons and ammo, but most of it was food.  I saw a hollow in a tree and I gingerly went up to it, checking the ground for anything unusual, and peered into the hole.  There, down in the hole, was a package wrapped in what appeared to be brown paper.  I called Mick over to have a look.  As he looked in the hole I stepped back a bit.  In no way was I inquisitive, I was too worried about booby traps to be curious – something that stayed with me for the rest of my life.  If I saw something I just left it there without going near it.  Mick hauled the parcel out of the tree and unwrapped it.  It was rice.

Tiny noticed some disturbed dirt.  He too was very careful as he prodded the dirt with his bayonet in case it was a mine.  He hit something soft so he started digging around and he too came up with a parcel with something wrapped inside.  He called out to the boss that he had found something and eagerly unwrapped it.  You could imagine his disappointment when he uncovered some dry fish.  The smell stayed on his hands for three days.

Over in Digger’s section they were uncovering some weapons and ammo – AK47s, ammo and RPG rounds that Digger posed with above.  We spent most of the day checking the area out.

Nigel was nowhere to be seen.

This camp was unusual because there were no bunkers.  Where ever we went in Phuoc Tuy Province we came across enemy bunkers.  In the swamp of the Rung Sat the bunkers were raised up above high tide level.  They were made out of mud and looked like igloos.  In the Nui Dinhs there were conventional bunkers with overhead protection.  Same same north of the Nui Dinhs right up to the Courtenay Rubber in the far north of the province.  Bunkers everywhere, mostly of the same design.  One important aspect I failed to mention is that there was no rubbish around any of these.  They were clean. C-L-E-A-N.  Nothing in these places but the structures.  No items, no bits of clothing or other stuff lying around.  Nuthin’.

We rarely came across tunnels.  The only tunnel system I saw was near a village and the opening had been exposed.  I looked into the entrance to the system.  It was a pit about four feet deep and two feet square.  What impressed me was how straight the walls were even though only  basic tools were used by the VC.  The entrance to the tunnel system was about half way down one of the side walls, just a little opening, again quite square in shape and it was so small I doubt if I could have fitted in.

Just think about this for a moment.  If a soldier went to enter the tunnel he has to drop down into the pit first.  This exposes his genital area to the opening of the tunnel.  He would be a sitting duck for anyone hiding inside.  We had engineers who went down into these systems with nothing more than a torch and a pistol.  They must have been mad.  There was no way I could have done that.

I think I had reached the high point in my career as a dumb grunt.  I was no good at forward scout.  I was pretty good as a number two machine gunner but there was no way I could go back to that job because in effect the number two is a pack mule.

I couldn’t do that engineer stuff of blowing things up and searching tunnels – a bloke could get killed.

No I guess I was stuck as platoon sig – you know, the guy with the squeaky little voice on the radio. 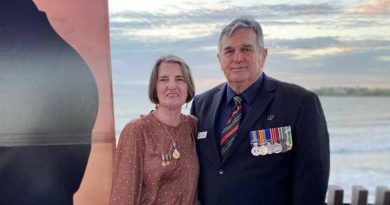 Who are these ANZACs? – by Ian Cavanough

One thought on “Chapter 55: Our time is getting short”