“Where’s the kaboom? There was supposed to be an Earth-shattering kaboom,” is a familiar question to older cartoon lovers.

In the attached video, there was no discernible explosion or ill affect to the ship when the RAAF Harpoon struck it – the much-vaunted anti-ship missile came nowhere near upsetting the ship, let alone sinking it.

Our first thought was, “we need a better ship-killing missile, because this one is obviously rubbish” (luckily we have no influence or input to Defence procurement – eh?)

We will admit, though, it never even crossed our minds that the shot fired by the RAAF at the live-fire sinkex was a ‘blank’ or a training round or an inert missile.

Well, because the shot was fired during a live-fire sinkex (which we reported under the headline “RAAF helps armies sink ex-USS Racine“), where the ultimate and stated objective was to actually sink a ship – and everyone else was obviously firing ‘live’ ammunitions (and RAAF obviously didn’t help sink the ship, if it was firing blanks).

“The priority of the launch was ensuring the Harpoon was released from the wing station and successfully met its target.”

But then the Defence spokesman went on to say that because of the number of weapon launches conducted over the course of RIMPAC, it would be inappropriate for each launch to carry a live warhead, especially when [firing on] the same target.

“Traditionally, the last weapon launch of an exercise carries a live warhead which results in the sinking of the target,” Defence said.

That sounds like a reasonable explanation too – if was true, which it isn’t.

This longer video of the event, released by the US DoD, clearly shows four significant explosions inflicting obvious significant damage on the ship even before “the last weapon launch [carrying the] live warhead”.

Well, we believe CONTACT cares. We believe they like/try to keep their audience abreast of relevant comings and goings and facts of Defence life and news.

But, when all official reports – Ministerial press release, Facebook posts, commentary in the official video, photo captions, story in RAAF Newspaper, story on US DoD web site etc etc – spruik ‘successfully fired its first Harpoon missile during a live-fire ship sinking exercise’ without once mentioning that it wasn’t a live missile, it simply casts a pretty thick shadow of doubt (just one more in a long litany) over the reliability of Defence public-information outputs.

Look – the bottom line is, we are not upset that RAAF fired blanks at a live-fire exercise. We are upset that the Australian Defence Force and its Minister so flagrantly play fast and loose with the simple facts of a news event.

Even CONTACT embarrassed itself by assuming that everyone was firing live rounds at a live-fire event, and initially headlined the story, “RAAF’s Poseidon fires first live Harpoon” (since changed for accuracy).

Granted, one would think CONTACT would have learnt by now that they shouldn’t assume anything – especially when it comes to notoriously unreliable Ministerial and Defence reporting.

But, FFS, they should be able to rely on it!

CAPTION: Ground crew load an ATM-84J Harpoon onto the port wing of the RAAF P-8A Poseidon in Hawaii during RIMPAC – with a second missile visible in the foreground. Other photos show the same personnel loading a Harpoon onto the starboard-wing pylon – indicating that the aircraft was loaded with two missiles. All Defence reporting of this flight talks about ‘a Harpoon missile’ in the singular – photos and video indicating it was the starboard-mounted missile that was fired. Photo by Corporal Nicci Freeman.

EDITOR’S NOTE: The missile fired was an ATM-84J – which Defence now (on 14 August – three full weeks after asking for clarification) tells us was an Air Telemetry Missile, which they actually class as a ‘live missile’, with the explosive warhead replaced by data-gathering electronics.

The Defence spokesman said “the Harpoon missile fired by the P-8A on RIMPAC 18 was the ATM (or telemetry) variant, designated an ATM-84. While this Harpoon did not contain an explosive or live warhead, the launch was characterised as ‘live’ as it was a real missile. The Harpoon behaved in the same manner as a live war shot missile as it left the P-8A’s wing, acquired and then hit the intended target. As the RAAF P-8A Poseidon continues its introduction to service, the use of a telemetric weapon in this instance allowed a detailed analysis of the weapon firing from pre-launch on the aircraft until destruction of the missile on impact with the target. Had the P-8A ATM missile shot on 12 July 2018 been unsuccessful, the telemetric missile data would have provided considerable detailed information for analysis to determine the cause of the unsuccessful shot. If a war shot missile had been utilised, and was unsuccessful, considerably less data would be available.“ 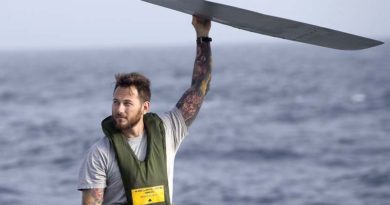 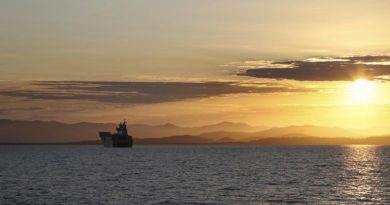