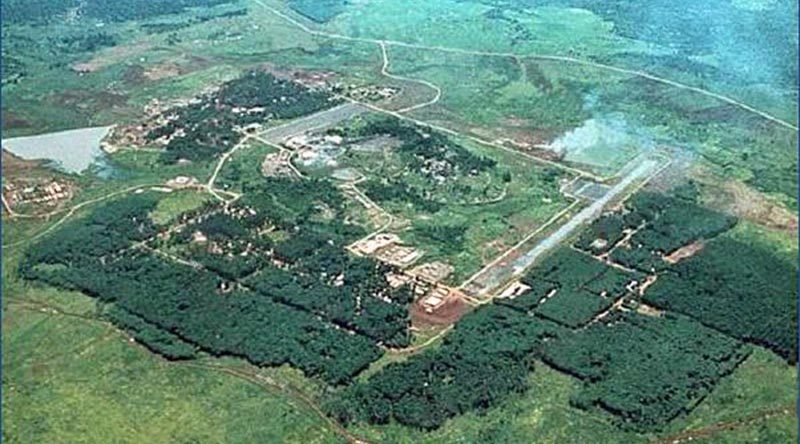 Nui Dat is where the fighting arms of the Australian Army were located to carry out combat duties in Phuoc Tuy Province.

As you can see, there’s not much to see, just a lot of rubber trees and a couple of airstrips.  As a dumb grunt I have a bit of a problem describing the details in this picture because I never did get a royal tour of the area, as we were confined to the rubber plantation in the left foreground.  If we were deployed on operations by truck we used the road at centre left that skirted the smaller airstrip which was used for helicopters, then out onto Route 2.  Later as we deployed by helicopter we used the cleared area centre left of the picture and not the main helicopter pad. The rubber plantation on the right also housed infantry soldiers.

When we first arrived in country there were three infantry battalions at the The Dat and during our tour we were reduced to two infantry battalions which meant we were out more and covering more of the province. The airstrip on the right catered for fixed wing aircraft.  I was at the airstrip one day and I watched in awe as a Hercules transport came in.  Those things just smacked onto the tarmac and braked heavily so that they would not overrun the short runway.  I guess that’s why there are runoff areas at both ends.

Near those buildings between the rubber and airstrip is where the entertainers performed if we were lucky enough to catch a show.  In 12 months we only caught one show of Australian performers because our platoon spent 318 days on operations.  Not a bad effort. The show featured Lorrae Desmond and the Taylor Sisters.  They were fantastic.  Lorrrae wore some sensational outfits and she was very popular with the troops.

This is how we lived among the rubber trees. As you can see, the tents are old.  We did refurbish many of the sandbags and later we used a corrugated iron wall filled with dirt in place of sandbags.

At The Dat we had plenty of work to do.  Plenty of area maintenance of course, but we also had to man the machine guns to protect the base.  In addition we had to conduct clearing patrols outside the base.  These were called TAOR patrols (Tactical Area Of Responsibility).  Our section, 5 Section, used to volunteer for these patrols to get away from all the bullshit.  After being out in the deep dark jungle, the TAOR patrols were seen as ‘pretty soft.’  We would patrol our allotted area, find a bloody great big patch of spiky bamboo by 4 pm and settle in for a quiet night with plenty of sleep.  We didn’t miss The Dat as the beer supply ran out fairly quickly.

I was lucky enough to be at The Dat when I turned 21.  We were on duty at Bravo Company manning one of their machine gun posts while they were out bush.  We used Killer’s machine gun on a facility that included a nice timber deck where a tripod was permanently mounted.  Digger was in charge and he arranged for me to be on picquet at midnight.

At the stroke of midnight I rang up Bravo Company HQ.  A concerned voice came on the other end, “B Company CP?”

“Let me be the first to wish you a happy 21st birthday mate.”

We didn’t really celebrate birthdays as we had nothing to celebrate with.  Alpha Company was outa beer so Smithy took me down to Charlie Company where one of his mates filled me up with the required amount of amber fluid.  So I managed to get pissed on my 21st, just like every other normal person.  The difference was for me it only took three cans!

I was a whiz at the phones.  One evening I dropped into Alpha Company HQ to find out what movie was playing at the open air theatre.  The guy on duty was busting for a crap and he asked me if I wouldn’t mind holding the fort for him.  He gave me a quick soldiers five on how the switchboard worked.  If a call came in all I had to do was pick up the phone and place the cable in where the call was originating from.  If they wanted the offer’s mess for example all I had to do was pull the matching cable from the bottom part of the console and plug it into the offer’s mess extension and turn the handle a couple of times.  I wasn’t allowed to listen in, and I had to check periodically if the caller was still on line by asking “CP working?” It was a bloody cinch, and besides, as it was just after mealtime, nobody would ring anyway.

Well as it happened someone fell over and damaged their face.  The phone rang.  “A Company CP, Pte Cavanough speaking, sir.”

“Yeah mate can you plug us through to the Doc?”

“The fuckwit is ringing us, he’s stuffed it up.”

I paused for a moment, and then I asked “CP working?”

“Ah, no mate he hasn’t answered yet.”

“I’ll give him another burl, sir.”

I then reversed the cables back to the way they should have been and rang the Doc.  Thankfully he answered.  A few moments later the CSM, Mother, was in the doorway.

“Pte Knackers, what are you doing here?”

No doubt someone complained about the idiot up at A Company CP.

“Just minding things because the sig needed to have a crap sir, is there a problem?”

“No, just Pte so and so split his head open.  The Doc has it in hand now.”

Mother could have chewed me out but he never did.  He was a good guy and he was well respected by the troops. The sig returned and I told him what had happened.  He seemed more concerned than I was.

“Gee those flies are bad at the shitter, they should do something about it.”

Sum Wun said that if you throw a smoke grenade down the pit it kills the flies.  The only danger is the smoke grenade may generate a spark and with all that methane gas in the shit pit it could blow the shithouse to kingdom come.

“Yeah thanks very much mate.”

They never did ask me back.

The next day Kucksy from 4 section had had enough of the flies too.

I don’t have to tell you that Kucksy was from Queensland.  Off he strode to the shitter with a smoke grenade in his hand.  We were all watching from a safe distance, behind a sandbag wall of course.  If the shitter went up we didn’t want to miss it. Kucksy disappeared inside the shitter, moments later he flings the flyscreen door open and sprints over to us.  He was highly excited and puffing heavily. We waited. All eyes just inches above the sandbag wall, waiting for the shitter to start it’s climb into outer space. Nothing happened.

“Hey Kucksy, didja pull the pin on the grenade?”

And then it happened.  Purple smoke started billowing from the shitter.  We all started laughing.  The shitter wasn’t going to explode after all; and then we realised that the smoke may well attract some attention from the NCOs, so we all went and hid in our tents.

The flies were back tickling our bums the very next day. 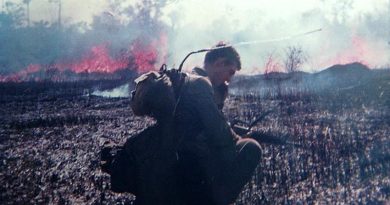