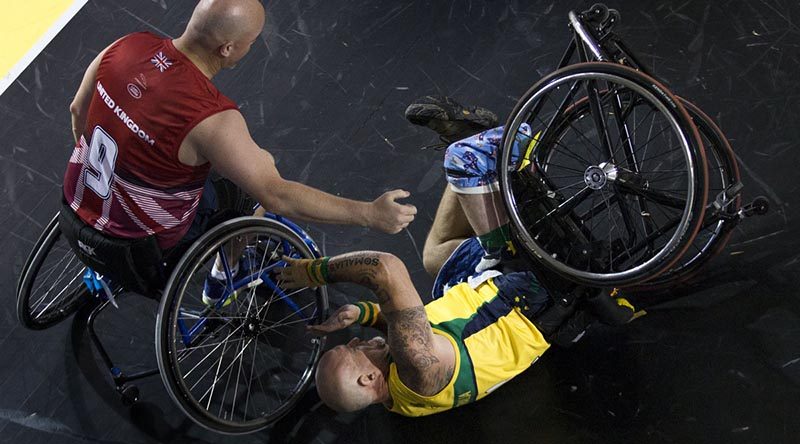 CONTACT had high hopes that this year’s Invictus Games coverage would be big, reliable and worthy of passing on to our audience.

CAPTION: Former soldier Jeff Wright is assisted after a fall in a wheelchair basketball pool match against Denmark. Photo by Corporal Mark Doran.

After all, we knew there was at least one photographer and an ARMY Newspaper reporter going to Toronto to cover the games.

Both those blokes, and the support staff back in Canberra, did a wonderful job covering the games as photographers, with loads of great photos posted to the Defence image library every day – nearly all of them fresh from the previous day’s competition (even with times-zones working against them). It was a brilliant and commendable effort – so ‘well done’ to all on the photography side.

Same same in the video department – the Defence video library had day six footage shot, edited, cleared and published on day seven of the game.

But, as always, photos are pretty much worthless without good-quality words to go with them – and this is where Defence has yet again let itself down.

Not only was there a paucity of writing released from Canberra, but what little there was, was old and unreliable/untrustworthy.

For example, the Invictus Games was held in Canada and officially opened on Saturday 23 September – yet, Defence’s press release, which came out on 25 September said the games were opened on “Sunday 24 September (AEST)”.

Who the hell cares what day it was in eastern Australia – the games were in Canada, and any journalist worth his wage would have given the day/date in local time.

I pretty much guarantee Corporal Mark Doran would have written it that way – and some numpty in Canberra probably changed it to AEST so that the two-day gap in releasing the info looked abridged somewhat.

Defence’s second press release about the games was sent to media at 4.42pm on the second-last day of the 8-day games – and the first paragraph trumpeted that “The medal tally for the Australian team is beginning to mount at the half way point“.

What does that mean?

It means that the reporter in the field wrote a press release at the half-way point of the games (Tuesday 26 Sept) and the Canberra-based clearance process delayed the release of that information until knockoff time on Friday (of a long weekend), without correcting the by-then-ridiculous timeline in the narrative.

And I reiterate – Friday’s press release was only the second, with the 8-day games closing on the Saturday.

And, true to form, a press release published on the Defence web site (but not sent to media by email, as is usual practice), dated Monday 2 October said, “…last night at the closing ceremony…” – which was actually held on Saturday night, 30 September.

In the mean time, nearly 400 excellent photos from Canada were left languishing on the Defence image library with no words to ‘carry’ them.

This rant follows a similar theme from Monday this week, where I claimed “Defence doesn’t know where HMAS Adelaide is” – for exactly the same reason.

Another comment from resident crankyman Sir Jeffrey Armiger, a retired Public Servant with a pet hate for BE – bovine excrement. Follow Sir Jeffrey on Facebook here.

Further proof Cadets (or at least their hierarchy) hate CONTACT