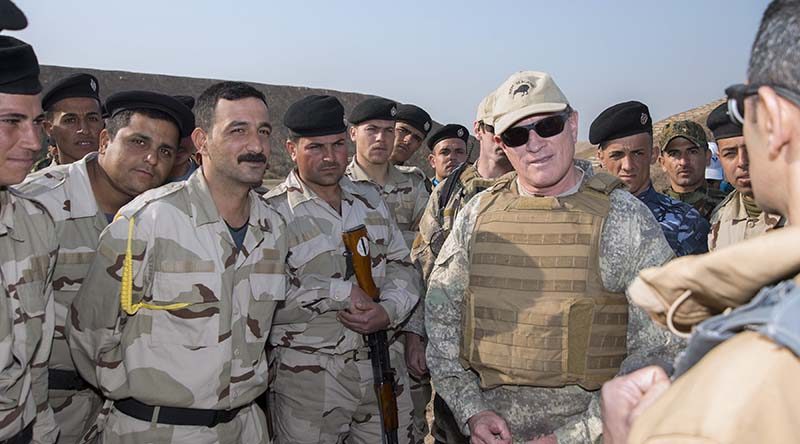 A combined New Zealand and Australian task group will be training about 2000 Iraqi Security Forces in the next fortnight as the Iraqi military continue the campaign to expel Daesh from their country.

Major General Gall said many of the forces trained by Task Group Taji have joined the assault to reclaim the western part of Mosul. Some form part of stabilisation forces who are working to ensure the gains made against Daesh in other parts of Iraq are sustained.

“We’ve helped build a fighting force that’s contributing to the current offensive against Daesh. But apart from force generation, we are also training the next generation of Iraqi military leaders who will be responsible for protecting their country in the future,” he said.

Task Group Taji, which is comprised of about 100 New Zealand Defence Force troops and some 300 Australian Defence Force personnel, has trained more than 21,000 Iraqi government forces since its training mission began in May 2015.

“They are better prepared, more likely to succeed and have a greater chance of surviving on the front line because of the training we have provided them,” the NZDF’s Senior National Officer in Taji said.

Although many of them have combat experience, even the Iraqi trainees find the training provided by the Anzac training force valuable.

“I’m very grateful to the New Zealanders and Australians who trained us. They’ve given us the skills we need to help us survive and return to our families, I will train our men for the fight, using the skills I learnt from Task Group Taji,” said Staff Sergeant Mohammed Faleh, who was deployed in early April to join the assault to capture the western part of Mosul from Daesh.

Staff Sergeant Faleh, who was one of the 280 Iraqi Army members who completed the first Officers and Junior Leaders Course in March.

Originally set for two years, the NZDF contribution to the international Building Partner Capacity mission in Iraq was extended recently by the government to November 2018.

Since last October, the NZDF has sent small groups of training and force protection teams to other secure training locations in Iraq. New Zealand soldiers have also been training stabilisation forces such as the Iraqi Border Guards in addition to the Iraqi Army.

The fifth rotation of 106 NZDF troops is currently in Australia to undertake mission-specific training with their Australian counterparts before departing for Iraq in late May.