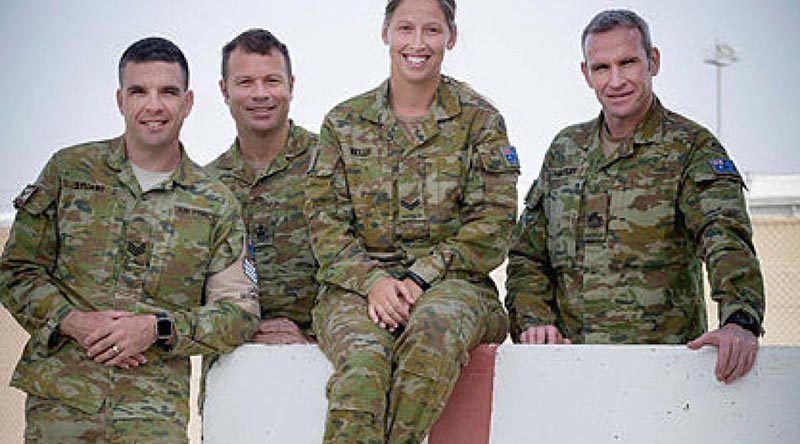 With a population of about 8500, what are the odds that no less than four past Murwillumbah residents would find themselves deployed to the Middle East at the same time?

And not only are they from the same little NSW town just south of the Queensland border, but three of them knew each other as children – and all four are deployed to Joint Task Force 633 at Australia’s main operating base for Operation Accordion.

Jason Hartley, 42, Clinton Doedee, 39, Ben Stuart, 35, and the youngest member of the group, 23-year-old Tayla Kelly, all grew up in the north-east NSW community, inland from Coolangatta.

Each has a different life story to tell but they started their careers with the same goal – to serve the nation.

However, it was not until WO1 Hartley received a phone call from his mother Lynn, asking if he had seen Ben, that he realised two other Murwillumbah locals were in theatre.

“Mum called and said she had spoken to Ben’s dad and that Ben was over here on his deployment,” WO1 Hartley said.

“Ben and I caught up and discovered that Clinton and Tayla were here too.”

He is now a sergeant with No. 2 Security Force Squadron from Tindal and has deployed as part of the Air Force police element.

While WO1 Hartley is finishing his deployment with FSE5, Sergeant Ben Stuart, Corporal Tayla Kelly and WO2 Doedee are just starting out with FSE6.

Some of their tasks include managing and distributing supplies and equipment necessary for the conduct of operations.

WO1 Hartley said he had fond memories of his mother working with WO2 Doedee’s mother as both were nurses at the local hospital on Ewing Street.

“We would often meet at hospital functions when we were just kids having fun,” WO1 Hartley said.

“I knew Ben through rugby, his dad was my coach.”

After discovering they were from the same location, the four caught up for a coffee.

“It was great catching up, we chatted for hours, reminiscing our childhood and catching up on all the gossip,” WO1 Hartley said.

“The four of us are planning on catching up at the surf festival next year.”

There are more than 1700 ADF personnel deployed to the Middle East region. 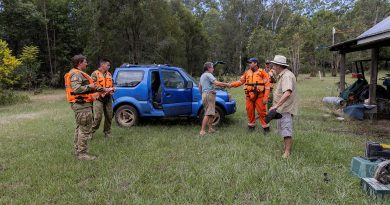 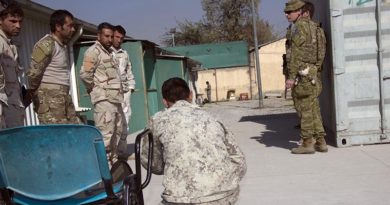