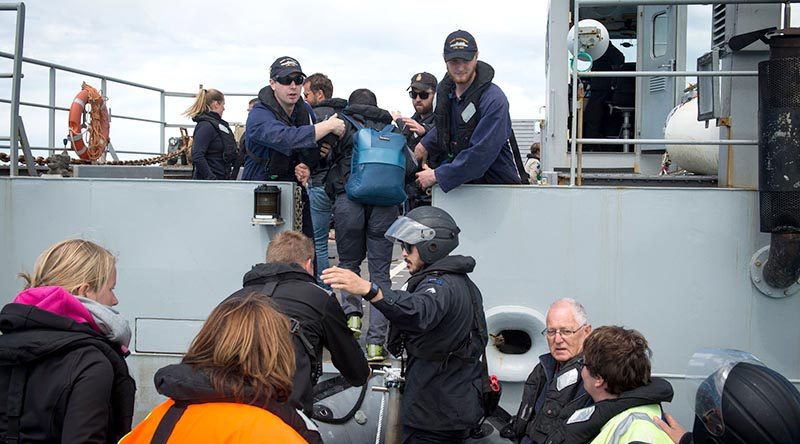 Air Commodore (AIRCDRE) Darryn Webb, the Acting Commander Joint Forces New Zealand, said Canterbury was helping in the ongoing evacuation of residents and tourists from the quake-damaged coastal town. About 150 people have embarked the ship since the evacuation began this morning.

“Our immediate priority is to evacuate as many displaced people as possible from Kaikoura. This will continue today using our NH90 helicopters and, following a successful seabed survey by Wellington, Canterbury and other significant maritime capabilities we now have in the region.”

AIRCDRE Webb said the NZDF has mobilised additional aircraft, vessels and personnel to support the Government’s earthquake response. The additional assets include the frigate HMNZS Te Kaha and replenishment tanker HMNZS Endeavour, which sailed overnight from Auckland and are expected to arrive in Kaikoura on Thursday.

“We have been working with the Ministry of Civil Defence in ensuring emergency needs in the affected communities are met promptly, and we are ready to provide additional support as required,” AIRCDRE Webb said.

A Royal New Zealand Air Force C-130 Hercules aircraft transported a generator and a water purification system earmarked for Kaikoura from Linton this morning. It will airdrop about 5000 litres of water to Kaikoura residents later this afternoon. Monday’s 7.5 magnitude earthquake disrupted power and water supplies in Kaikoura and cut off land access to the town.

Four NH90 helicopters from the Air Force’s 3 Squadron rescued 200 people and delivered 1.3 tonnes of water, 300kg of food and jerrycans of diesel to Kaikoura on Tuesday. The helicopters continued to deliver essential supplies and rescued about 60 stranded residents and tourists from Kaikoura this morning.

The NZDF has mobilised about 500 personnel, at least 11 aircraft and four vessels to support the Government’s earthquake response.

The NZDF forces currently at Kaikoura will be joined over the next 24 hours by Australian, Canadian and United States warships with their embarked helicopters. The helicopters will be able to be used for a variety of tasks including personnel and stores transfer, and conducting critical needs assessment of isolated communities. In total, the ships that are yet to arrive are carrying four helicopters, which will be added to the existing NZDF helicopters operating from land and sea.

Surveillance aircraft from Japan and the United States have also been made available to conduct aerial reconnaissance of quake-damaged areas.

About 600 residents and tourists in Kaikoura were evacuated by air and sea today as the New Zealand Defence Force stepped up evacuation efforts in the quake-damaged coastal town.

“The evacuation has been a complete success. We achieved our immediate priority, which is to evacuate as many displaced people as possible from Kaikoura,” Air Commodore Darryn Webb, the Acting Commander Joint Forces New Zealand, said.

Air Commodore Webb said that with the evacuation successfully completed, the NZDF’s disaster relief operation would now focus on the delivery of vital aid supplies to quake-damaged communities.

“This is where our NH90 helicopters as well as those provided by our international partners will be of most help. Monday’s earthquake cut off land access to Kaikoura and other communities close to its epicentre so the only way we can get food, water and other basic necessities to these areas is by air.”

The amphibious sealift vessel HMNZS CANTERBURY sailed to Christchurch this evening with about 450 people, four dogs and about seven tonnes of baggage on board. The vessel is expected to arrive in Lyttelton around 1am on Thursday.

Two NH90 helicopters from the Royal New Zealand Air Force’s 3 Squadron delivered about 8000kg of aid supplies and rescued another 165 people from Kaikoura.

Commanding Officer of CANTERBURY Commander Simon Rooke said it was all hands on deck as soon as the ship arrived this morning. The entire crew was pleased that we were aided by good weather to achieve our mission of evacuating a good number of people.

“It is a matter of pride for us all that CANTERBURY has been able to assist the communities affected by the earthquake, since she was also at the forefront of disaster relief efforts when a massive earthquake struck Christchurch in 2011.”

An Air Force C-130 Hercules aircraft airdropped about 5000 litres of water to Kaikoura residents around 6pm.

It also transported a generator and a water purification system for Kaikoura from Linton Military Camp in Manawatu this morning.

Monday’s 7.5 magnitude earthquake disrupted power and water supplies in Kaikoura and cut off land access to the town.

The NZDF has mobilised about 500 personnel, at least 11 aircraft and four vessels to support the government’s earthquake response.

Warships from Australia, Canada and the United States, which are currently in the country to take part in the Royal New Zealand Navy’s 75th anniversary, have been retasked to support the national relief effort following Monday’s powerful earthquake.

The ships – HMAS DARWIN, HMCS VANCOUVER and USS SAMPSON – are expected to arrive in Kaikoura from tonight.

Surveillance aircraft from Japan and the United States conducted surveys of quake-damaged areas on Wednesday.

Aid supplies (from the NZDF, Ministry of Civil Defence and Red Cross) 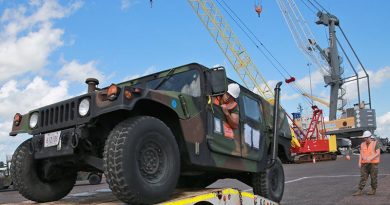 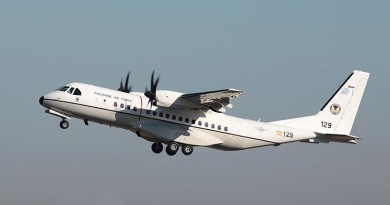