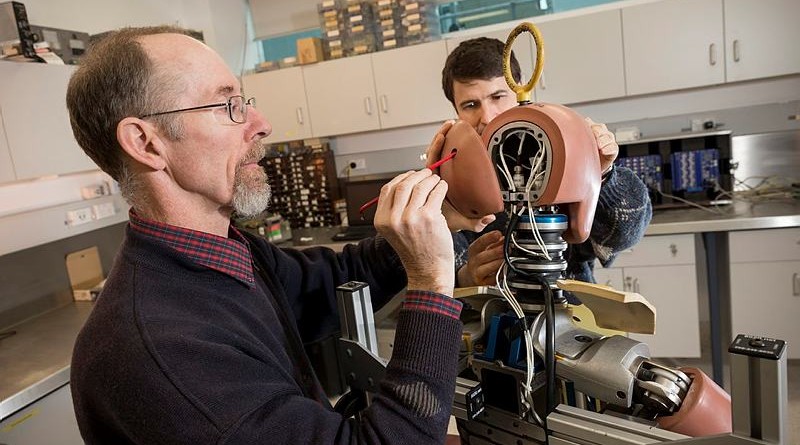 Both men are from the Dynamic Military Loads Group in the Australian Defence Force.

The poor, unfortunate dummy is about to participate in experiments to simulate the effects on a human caused by shock in a blast situation.

The dummy is no ordinary dummy, however. He is a Human Thoracic Surrogate (HTS), designed by Adelaide-based T&E Systems, engineered to allow measurement and assessment of human injury, principally in primary-blast-injury situations and to measure the effectiveness of personal protective equipment, body armour and other mitigating technologies and equipment.

T&E Systems says the HTS is the first anatomically accurate, biofidelic and re-usable human thoracic model. As such, it is well suited to assessing the protection efficacy of actualprotective garments and equipments (most other surrogates are not human in shape).

“The synthetic materials developed to represent the various soft tissues within the HTS (e.g. muscles, organs etc) have similar physical characteristics to real human tissues, although do not degrade with time or vary significantly with temperature (as do gelatin based tissue simulants).

“By careful design, selection of materials, and testing, the response of the HTS to external loading is well correlated with human response.

“The HTS spinal assembly is constructed from eighteen uniquely shaped rigid vertebrae bonded within a flexible elastomer. The elastomer portion of the spinal assembly has external protrusions that simulate anterior, posterior, medial and lateral ligament and muscular groups. The vertebrae are manufactured from polycarbonate using a high-pressure injection moulding technique, and contain a central hollow for cable passage. When assembled, there is a parallel disc space of 5mm between all vertebrae and the spinal curvature results from angulation within the vertebrae. At the rear of T6 vertebrae, a flat face containing metallic threaded inserts allows for the attachment of a custom designed, multi-axis, linear and rotational accelerometer mount. Cabling form these accelerometers can be routed back into the spinal cable passage, which transitions from 12mm to 20mm in diameter below T6 to allow for additional wires. Near the base of the spinal assembly on the medial and lateral surfaces of L3 and L4 vertebrae there are bores for cabling to exit and connect to relevant terminals on the connectors or circuit board.”

So – I guess you could say this dummy is actually a smart.

Anyway – Defence would like you to note that, aAcross the Australian Defence Force, Australian Public Service (APS) staff work alongside uniformed personnel to deliver capability in support of national defence objectives. 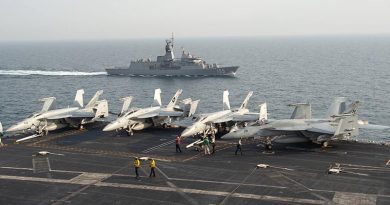