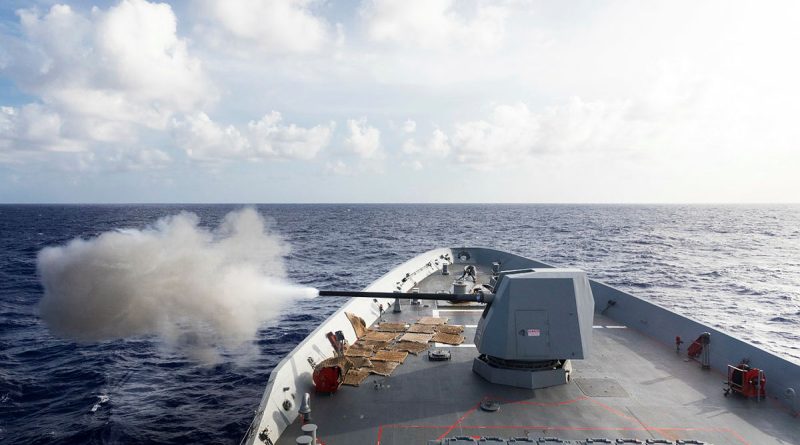 Navy ships from Australia, Japan, and Canada fired their biggest guns during a multinational gunnery exercise (gunex) in the North Pacific Ocean near Japan.

As the ships fired in sequence a smoky haze drifted across the water, evoking sea battles through the ages.

The gunex was part of Exercise Keen Sword.

“The more of these exercises we do the better prepared we are in the future,” Lieutenant Harradine said.

The ships involved in the gunex, Hobart, JS Asahi and Setogiri, and HMCS Winnipeg were already well versed in surface gunnery.

“The importance of this exercise was that it enabled the practice of multinational surface gunnery procedures,” Lieutenant Harradine said.

The target was a small remote-controlled boat called a “Hammerhead”, launched by Winnipeg in choppy seas.

“Despite the small target disappearing [from view] in the wave troughs, the serial was a success and the target was destroyed,” Lieutenant Harradine said.

As the on-watch principal warfare officer on the day, Lieutenant Harradine planned and executed the gunnery serial.

“I was quite excited. [It was my] first shoot,” Able Seaman Ludowici said.

“I was controlling everything from a console, from moving the gun to releasing the rounds.”

The five-inch gun swivelled and moved up and down as the optimal firing solution was selected.

“I get an engage order from the principal warfare officer,” Able Seaman Ludowici said.

“I then quickly let them know the gun was about to fire.”

After his successful debut, Able Seaman Ludowici helped clear the deck of spent shells ejected from the five-inch gun. 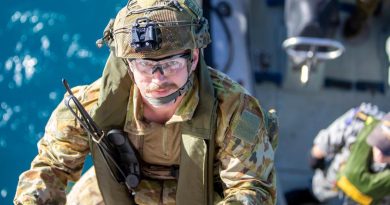 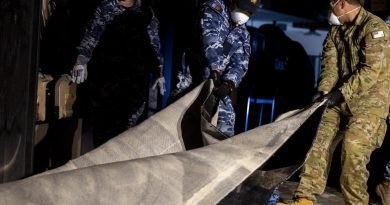