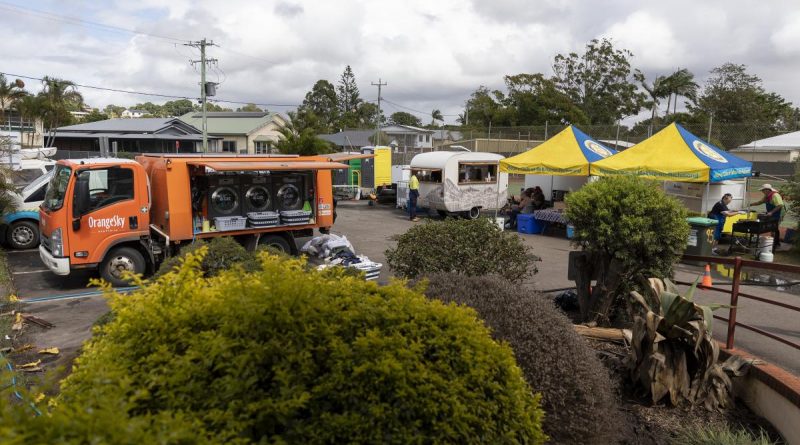 Local volunteers are coordinating care, clean-up and rebuild in the Broadwater area of NSW.

Army soldiers from 8th/9th Battalion, Royal Australian Regiment, have been in the region since Operation Flood Assist 2022 commenced, helping volunteers and triaging support.

One such volunteer is local resident, Karina McKey.

Karina’s house was not affected by the floods, which enabled her to take on a role as a community leader and support coordinator.

A disability consultant in her regular job, Karina is well known within the tight-knit community.

“In my role I’ve been talking with locals, coordinating volunteer efforts, providing structure at the support hub, and connecting people with the services they need,” Ms McKey said.

“In the beginning the services all arrived together, and the Australian Defence Force (ADF) has been invaluable in coordinating all this.

“There’s lots of things you don’t think about when turning a community centre into a hub of support.

“The ADF has been through and supported activities like this in the past, we haven’t.

“They’ve given us advice on simple things that make a big difference to how the day runs. Stuff like traffic management, managing hygiene issues, moving people and logistics.”

When Lieutenant Brook Wright and his team from 8th/9th Battalion, Royal Australian Regiment, arrived by helicopter they went straight to the community centre, met Karina and got stuck in helping.

“We started door knocking and were able to quickly identify the needs of people and some things that weren’t being met,” Lieutenant Wright said.

Together, they undertook a two-phase approach, with town leaders like Karina coordinating support and care so that the soldiers could get into the clean up and make sure the rebuild starts.

“The community has been really receptive to our presence, especially the coordinated approach between services, volunteers and the ADF,” Lieutenant Wright said.

“The town has been gathering in the afternoon, where the locals come in from around the region and we were able to chat and laugh with them, see what they needed, and get stuck in.”

Broadwater is not historically a flood town, so when surrounding towns started being inundated, Broadwater residents didn’t think they would be affected.

However, when water started to rise and cause concern, many locals took their campervans and caravans to higher ground.

Later, locals with boats collected stranded residents and their pets from roofs.

“The water level held for seven days. During this time, supplies were dropped in via helicopter and ferried out by local boaties,” Karina said.

“When the Army arrived, it was visually spectacular. The helicopter landed in a swamp, and the personnel were all covered in mud. They arrived just at the right time and were fantastic at refining the logistics and support systems we had started to establish.”

It is thought that around 90 per cent of Broadwater’s houses have been damaged or ruined by floods. 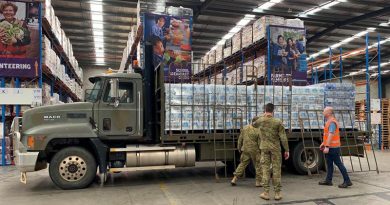 Enough to feed an army – of firefighters 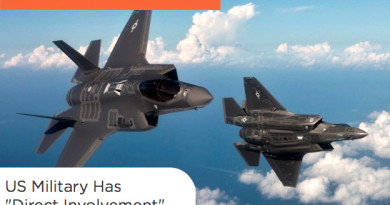