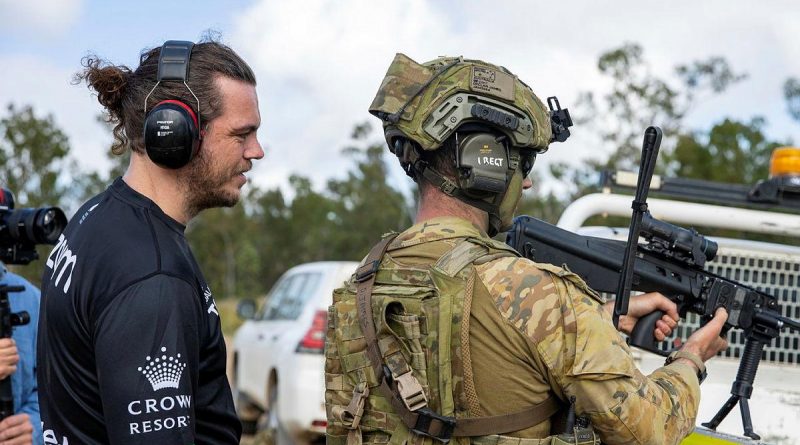 The relationship between the NRL South Sydney Rabbitohs and 104 Battery, 1st Regiment, Royal Australian Artillery, has been reinvigorated after a visit to Shoalwater Bay Training Area.

Souths and 104 Battery have had an affiliation since the mid-1960s when the battery was based in Sydney upon being re-raised during the Vietnam War.

During the recent Exercise Barce, former Rabbitoh Ethan Lowe and Chief Commercial Officer Shannon Donato got to experience life on a gun line.

“It was outstanding to hear the pride with which they talk about their battery, and to know the pride that we have in the Rabbitohs are very similar, it all seems to align,” Mr Lowe said.

“The fact that they have adopted us I think is outstanding. There are a lot of values that line up, and I think it’s really great.”

The Rabbitohs duo observed a live fire, assisted with applying fuses to rounds, witnessed the impact of rounds from an observation post and sampled an Army ration pack.

“Obviously both depend on everyone being good at their own individual drills whether that’s football drills or gun drill and all those teams coming together and working together to achieve a larger organisational goal.”

Mr Lowe paid tribute to the commitment shown by the 104 Battery members.

“It’s something very special, you put your hand up and serve and put yourself in harm’s way to help protect the rest of the country,” he said.

“I think it’s outstanding for them and it’s a credit to them as people and as a unit to what they do.”

Souths donated some Rabbitohs match jerseys, while 104 Battery gifted some of their iconic PT shirts that feature Souths colours to the Rabbitohs.

Captain James thanked the Rabbitohs for taking time out to pay a visit.

“I think it’s a pretty special relationship, it’s not often that an elite sports club and an Army sub-unit have the opportunity to maintain such a healthy relationship over nearly seventy years,” he said.

“I think it’s a pretty important thing, it’s something that we will definitely seek to continue in the future.” 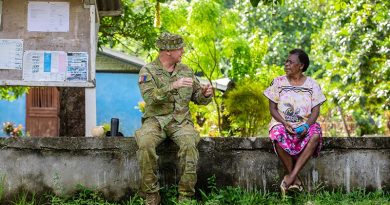 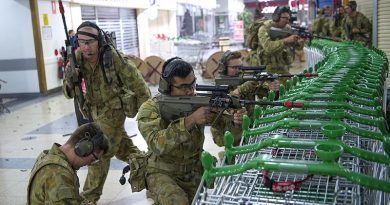 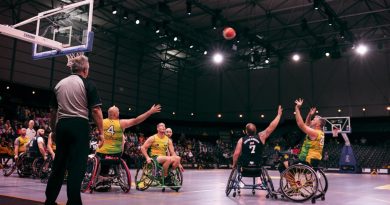