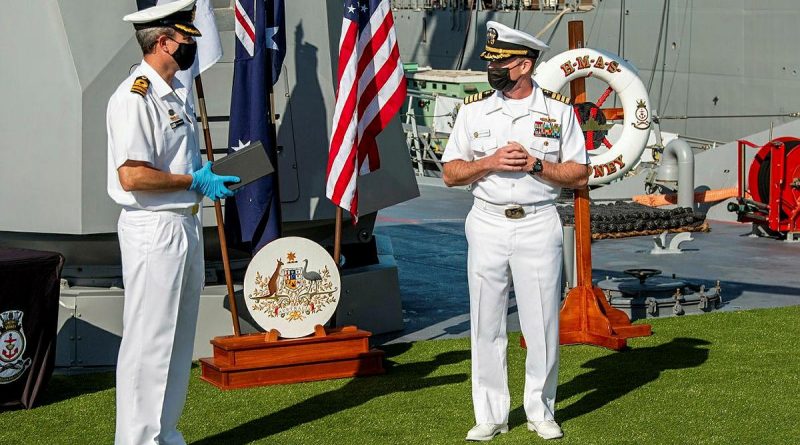 The tireless work of United States Navy (USN) officer Commander Robert Eilers in supporting the tactical development for Hobart- and Hunter-class ships has been recognised by the Royal Australian Navy.

The presentation was made while Sydney was alongside San Diego Naval Base in the US.

Commander Seymour said it was very rare for the commendation to be awarded to foreign personnel.

“It is only significant achievements which are recognised with a Commander Australian Fleet Silver Commendation,” Commander Seymour said.

Commander Eilers, from the Naval Surface and Mine Warfighting Development Centre in San Diego, California, is responsible for international engagement and foreign disclosure.

Commander Eilers’ experience in international engagement and tactics is vast. He recently completed an assignment as the US Indo-Pacific Command as the Senior Korea Country Director for the Policy and Plans Directorate.

He also has extensive experience managing military-to-military engagement with China and Taiwan, and has led theatre security cooperation planning efforts for Exercise Rim of the Pacific 2014 and 2016.

After receiving the presentation on board Sydney, Commander Eilers said of all the awards he had received in his career, he considered the Silver Commendation the most significant.

“I feel very honoured to be recognised by the Royal Australian Navy,” Commander Eilers said.

“Alliances are important, but they are much more than a piece of paper; they are about cooperation, trust and reciprocity.

“That cooperation should absolutely extend to the sharing of tactics and training methods that enable both navies to operate common equipment at the same high levels of proficiency.

“Doing so enhances interoperability and makes us both a more effective fighting force.”

Australia and the US this year mark 70 years since the signing of the ANZUS Treaty.

Commander Eilers’ commendation is another example of the alliance’s enduring value in forging strong people-to-people links and continuing the broad and deep cooperation between the two countries.

Sydney is deployed to the United States and Canada until the end of July to undertake the final stages of her Hobart-class DDG acceptance-into-service work.

While alongside at San Diego, Sydney is conducting the shore phase of her combat system sea qualification trials. 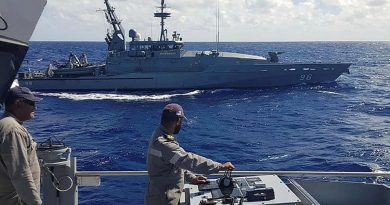