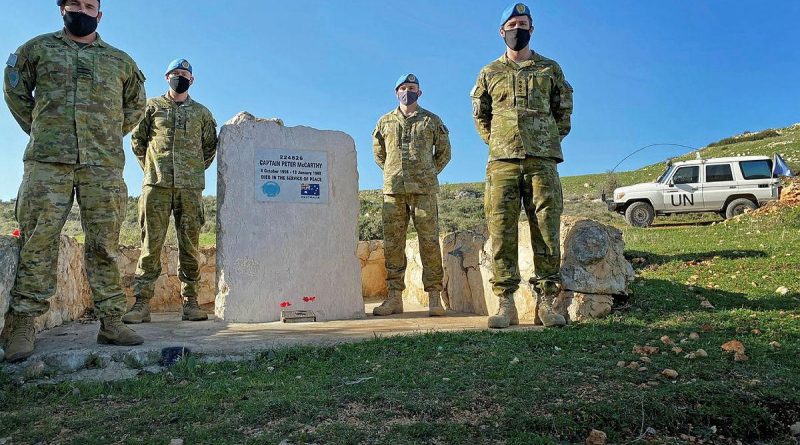 A memorial service was held in Lebanon on 18 January to honour Australian Army Captain Peter McCarthy who was killed by a landmine 33 years ago while serving as a peacekeeper.

Captain McCarthy, a Royal Australian Corps of Transport officer, was aged just 31 when the Jeep he was travelling in hit an anti-tank landmine on 18 January  1988, during a routine peacekeeping patrol in southern Lebanon.

Personnel from the Observer Group Lebanon (OGL) and United Nations Truce Supervision Organisation (UNTSO) gathered for the commemoration service at Captain McCarthy’s memorial, located at the site of the incident on what is now called McCarthy Hill.

OGL Chief Operations Officer Squadron Leader Michael Fox said the annual commemoration was a reminder of the dangers faced by all peacekeepers.

“He, and those who lost their lives before and since, are reminders of the dangers faced every day by Australian personnel maintaining the equilibrium in locations that are littered with the detritus of war, or are still simmering politically.”

Captain McCarthy was on patrol with Canadian Major Gilbert Cote when he died.

During the morning, the pair drove to a high-observation point on a hill near the village of Chamaa in southern Lebanon, several kilometres from the UN headquarters.

The frequently used point provided excellent views north to the city of Tyre, south to the Israeli border, and west over the waters of the Mediterranean.

On the way, their Jeep had been run off the road by an Armoured Personnel Carrier while coming around a blind curve.

The men in the APC helped Captain McCarthy and Major Cote pull the vehicle upright and they continued to the observation point.

Returning down the hill, the Jeep struck the landmine, which was probably intended for Israeli or South Lebanese army vehicles that occasionally used the track.

Major Cote was thrown from the vehicle and seriously wounded.

Captain McCarthy, who grew up in the New South Wales town of Quirindi, was one of 13 Australians attached to the UNTSO mission at the time of his death.

He was posthumously awarded the RSL’s ANZAC Peace Prize in 1988, sharing the honour with the Australian Defence Force.

Later that year, the Nobel Peace Prize was awarded to the UN Peacekeeping Forces, honouring all those, like Captain McCarthy, who served the cause of peace. 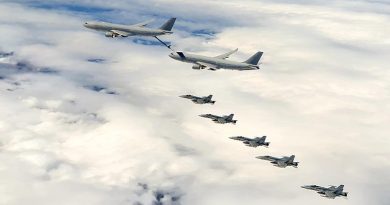