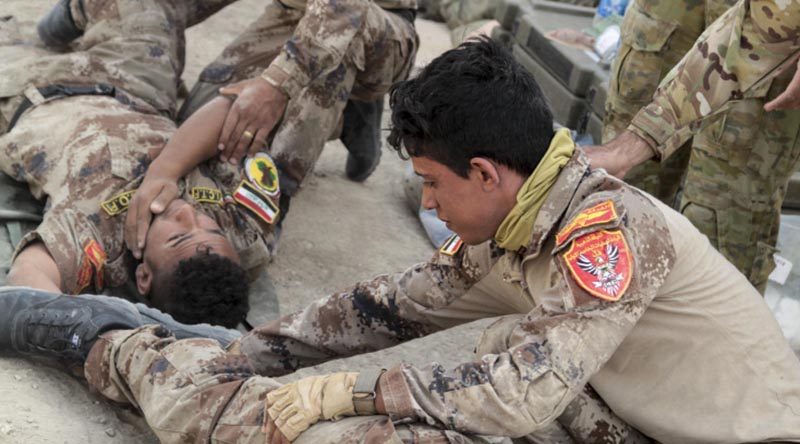 Another explosion rocks Mosul, this one resulting in a number of Iraqi Counter Terrorism Service (CTS) soldiers being rushed to a casualty collection point.

Among the medics waiting to triage the wounded are Australian Special Operations soldiers, whose commitment to their CTS comrades is absolute.

Since 2014, Australian Special Operations Task Group personnel have been advising and assisting the Iraqi CTS, who have been at the forefront of fighting to reclaim Mosul.

Corporal A explained he had barely just arrived in Mosul when he was dropped in the deep end.

“We arrived at 2am and we had our first casualties at seven in the morning,” Corporal A said.

“It was a mass-casualty event involving 18 soldiers caught in a blast at a booby-trapped house.

“That was my welcome to Mosul.

“After that was an initial lull because they were still doing clearances, but as soon as they started into Old Mosul we’d receive between 10 and 33 casualties every day.”

In the two-and-a-half months that followed, Corporal A treated 480 casualties ranging from triple amputations to head wounds and exposed abdominals.

Corporal A was part of a team of US military medics including a doctor, surgeon and anaesthetist, where he often stopped doctors working on patients, as he conducted tragic but essential triage.

“I’d have to pull up the doctor and get him to stop CPR,” he said.

“I’d say, ‘we have to move to this casualty and get him stable, then out the door, because we had a new casualty coming in.

“If we’re trying to do all this effort for somebody we know is going to die, we have to change our focus.”

The medic found himself making such decisions daily while still in his first year as a corporal.

Kept awake by coffee, Corporal A often spent 18-hour days triaging casualties and coordinating the collection point that stabilised patients before moving them to hospital.

“We’d get a phone call from the city saying there’s casualty coming in.

“We’d be out the front ready to receive them – after they’d gone through all the checkpoints, they’d come to us.”

The casualty clearance station was run from three tents, consisting of a Role 1 Facility and an overflow area (a Role 1 has a range of support for the initial care up to trauma or tactical wound management or aggressive resuscitation).

“If it was serous, they went in to tent one, if they weren’t too bad they were in tent two,” Corporal A said.

The collection point was set up to treat wounded soldiers from the Iraqi CTS and was augmented by local medics and doctors.

“Some of the Iraqi doctors would say they’d seen the same guys wounded at Ramadi or Fallujah,” Corporal A said.

“They were shot or blown up six or seven times but still in the fight.

“I think it’s their national pride – they just want to get ISIS out of their country.

“They don’t want to let down their mates, so they continue to fight.”

When things got too busy, Corporal A could bring in others from the Australian Special Operations Task Group to come and help.

“The guys were all happy to do what needed to be done – they were more than willing to help out,” he said.

They kept talking about their experiences whenever there was down time.

“Some of the medics and doctors were very junior, it was good to sit down with them to talk about things so they could get it off their chest and not hold onto stuff,” Corporal A said.

“If anyone felt overwhelmed, we would talk to each other, help them back off and calm down.”

Despite the massive number of casualties Corporal A treated, it was common for medics in his position, before and after, to treat more than 400 patients during their time running a casualty collection point.

“It’s not until you get back on leave and realise how tired you really are and you can sleep for a couple of days.

“You do feel you’re doing a part in indirectly fighting ISIS, whether it be as a combat first-aider, a medic or a trainer.

“It all helps give the Iraqis confidence knowing there are such good people behind them.” 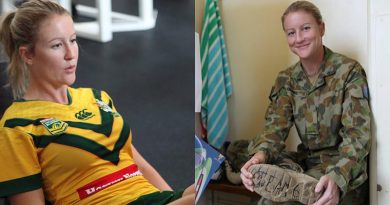 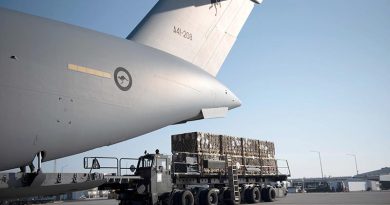 Symposium on lesson from the first six weeks of Ukraine invasion