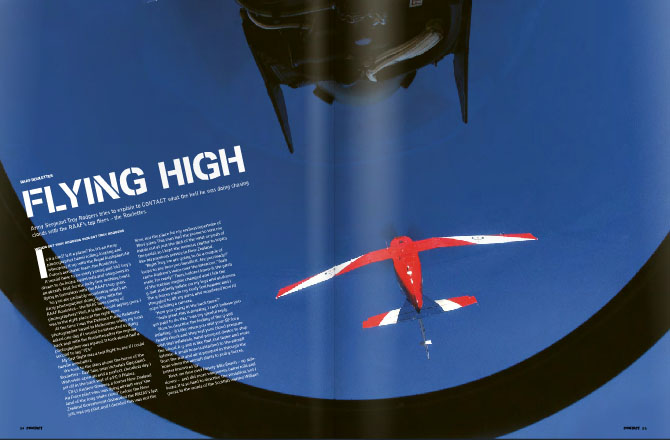 Troy Rodgers tries to explain how the hell an Army sergeant gets to chase clouds with the RAAF Roulettes.

This story was published in issue 1 of CONTACT Air Land & Sea, in March 2004

Is it a bird? Is it a plane? No, it’s an Army photographer barrel rolling, looping and whooping it up with the Royal Australian Air Force’s aerobatic team, the Roulettes.

It would have to be every young and ‘old’ boy’s dream to do loops, barrel rolls and wingovers in an aircraft. And, for the lucky few, nothing beats flying in formation with the RAAF’s top guns.

So, you are probably wondering what’s an Army photographer doing flying with the RAAF Roulettes – the RAAF have plenty of their own photographers?

Well, it is like the old saying goes – I was in the right place at the right time.

At the time I was the Defence Public Relations photographer based in Melbourne when my boss asked one day if I would be interested in flying back seat with the Roulettes after the regular photographer was injured. It took about half a second to say “YES!”

My first flight was a test flight to see if I could handle aerobatics.

We took to the skies above the home of the Roulettes – East Sale, near Victoria’s Gippsland. With wide-open air and a perfect, cloudless day, I set off in the back seat of a PC-9 Pilatus.

Flt-Lt Andrew Greaves, a former New Zealand Air Force pilot who was flying aircraft over “the land of the long white cloud” before the New Zealand government disbanded the RNZAF’s fast jets, was my pilot, and I decided this was not the time, nor the place for my endless repertoire of ‘Kiwi’ jokes. This man had the power to turn me inside out at just the flick of the wrist or push of the pedal, so I kept the nervous chatter to topics like his previous service in New Zealand.

“Right Troy, we are going to do a couple of loops to see how you handle it. Are you ready?” came Andrew’s voice over the intercom. “Yeah mate, I’m ready!” Then, before I knew it, the pitch of the turbine engine changed and I felt the g-suit suddenly inflate on my legs and abdomen. The g-forces made my body feel heavier and I struggled to lift my arms, and wondered how I’d cope holding a camera.

“How you going in the back there?”

“Yeah great, this is amazing. I can’t believe you get paid to do this,” was my gleeful reply.

Now, to describe the feeling of the g-suit inflating – it’s like when you visit your GP for a health check and they test your blood pressure with that inflatable, hand-pumped device to stop the blood. A g-suit is like that, but faster and more intense. A small hose is attached to the aircraft from the suit and air is pumped in through the hose when the aircraft starts to pull g-forces, better known as ‘gs’.

Next, we flew over Ninety-Mile Beach – up side-down! –  and did more wingovers, barrel rolls and loops. It is so hard to describe the sensation, but I guess, in the words of the Scottish warrior William Wallace, “Freedom!” comes close. I can honestly say I never felt so free before, especially when free-falling after a loop.

I was surprised to find that I didn’t feel sick – except when we were level flying back to the RAAF base to pick up my camera gear and a second aircraft.

I found the helmet and oxygen mask made placing the cameras against my face difficult, and cameras were heavy in my hand but the photographs appeared to be in focus and well exposed – to my surprise. 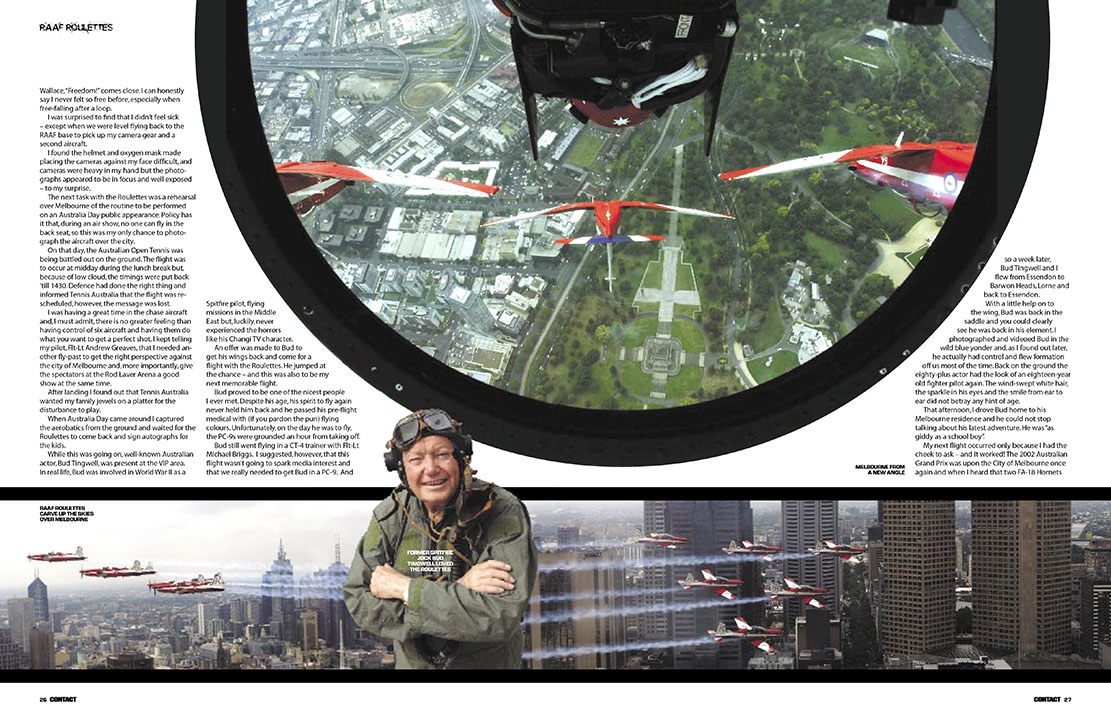 The next task with the Roulettes was a rehearsal over Melbourne of the routine to be performed on an Australia Day public appearance. Policy has it that, during an air show, no one can fly in the back seat, so this was my only chance to photograph the aircraft over the city.

On that day, the Australian Open Tennis was being battled out on the ground. The flight was to occur at midday during the lunch break but, because of low cloud, the timings were put back ‘till 1430. Defence had done the right thing and informed Tennis Australia that the flight was re-scheduled, however, the message was lost.

I was having a great time in the chase aircraft and, I must admit, there is no greater feeling than having control of six aircraft and having them do what you want to get a perfect shot. I kept telling my pilot, Flt-Lt Andrew Greaves, that I needed another fly-past to get the right perspective against the city of Melbourne and, more importantly, give the spectators at the Rod Laver Arena a good show at the same time.

After landing I found out that Tennis Australia wanted my family jewels on a platter for the disturbance to play.

When Australia Day came around I captured the aerobatics from the ground and waited for the Roulettes to come back and sign autographs for the kids.

While this was going on, well-known Australian actor, Bud Tingwell, was present at the VIP area.  In real life, Bud was involved in World War II as a Spitfire pilot, flying missions in the Middle East but, luckily, never experienced the horrors like his Changi TV character.

An offer was made to Bud to get his wings back and come for a flight with the Roulettes. He jumped at the chance – and this was also to be my next memorable flight.

Bud proved to be one of the nicest people I ever met. Despite his age, his spirit to fly again never held him back and he passed his pre-flight medical with (if you pardon the pun) flying colours. Unfortunately, on the day he was to fly, the PC-9s were grounded an hour from taking off.

Bud still went flying in a CT-4 trainer with Flt-Lt Michael Briggs.  I suggested, however, that this flight wasn’t going to spark media interest and that we really needed to get Bud in a PC-9.  And so a week later, Bud Tingwell and I flew from Essendon to Barwon Heads, Lorne and back to Essendon.

With a little help on to the wing, Bud was back in the saddle and you could clearly see he was back in his element. I photographed and videoed Bud in the wild blue yonder and, as I found out later, he actually had control and flew formation off us most of the time. Back on the ground the eighty-plus actor had the look of an eighteen-year old fighter pilot again. The wind-swept white hair, the sparkle in his eyes and the smile from ear to ear did not betray any hint of age.

That afternoon, I drove Bud home to his Melbourne residence and he could not stop talking about his latest adventure. He was “as giddy as a school boy”.

My next flight occurred only because I had the cheek to ask – and it worked! The 2002 Australian Grand Prix was upon the City of Melbourne once again and when I heard that two FA-18 Hornets were arriving,  I suggested to my boss that photos were required – not from the ground, but in the air! He agreed, and so my next flight with the Roulettes was signed sealed and delivered.

The FA-18 Hornets arrived late one afternoon and I captured them over the Albert Park circuit. It was just as much a thrill to fly beside them and once again have the ability to move these multi-million-dollar machines where I needed them for my shots.

There would be only two-passes during which I had to shoot both stills and video. It was a struggle, but the pilot of the PC-9, this time Flt-Lt Col Ells, showed tremendous skill flying inverted beside these supersonic jets, so I could get both jets and race track in the same shot. The photo worked and, if only I had copyright ownership of that photo, I could have retired on the potential sales at the race track.

My last flight with the Roulettes was over the venue for the 2002, 500cc Motor Cycle Grand Prix at Phillip Island.

The youngest Australian rider for the race was Casey Stoner, a 17-year-old speedster, who hung on every word Roulette One, Sqn-Ldr Sean Bellenger said to him during the safety brief and ground training.

This flight to Phillip Island was to be my most memorable, with more aerobatics than I had ever done with the Roulettes before – at least six loops, with barrel rolls and wing-overs thrown in for good measure.

While I was looking through the camera I was fine, but the return flight is one I do not wish to remember. My dignity, however, went with me in the bottom, zip-up pocket of my flying suit!

The next time I flew with the RAAF wasn’t with the Roulettes, but was still quite exciting as I documented US Marine Corps FA-18 Hornets and French Mirage fighters conducting air-to-air refuelling over Afghanistan.

Ah… but alas, that’s another story! 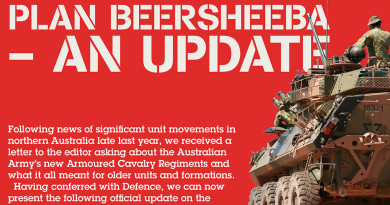 What does Plan Beersheeba mean for Australian armoured units? 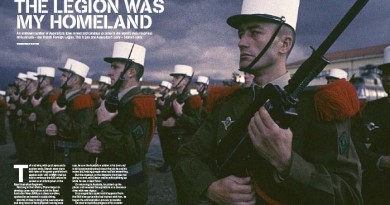 The Legion was my Homeland